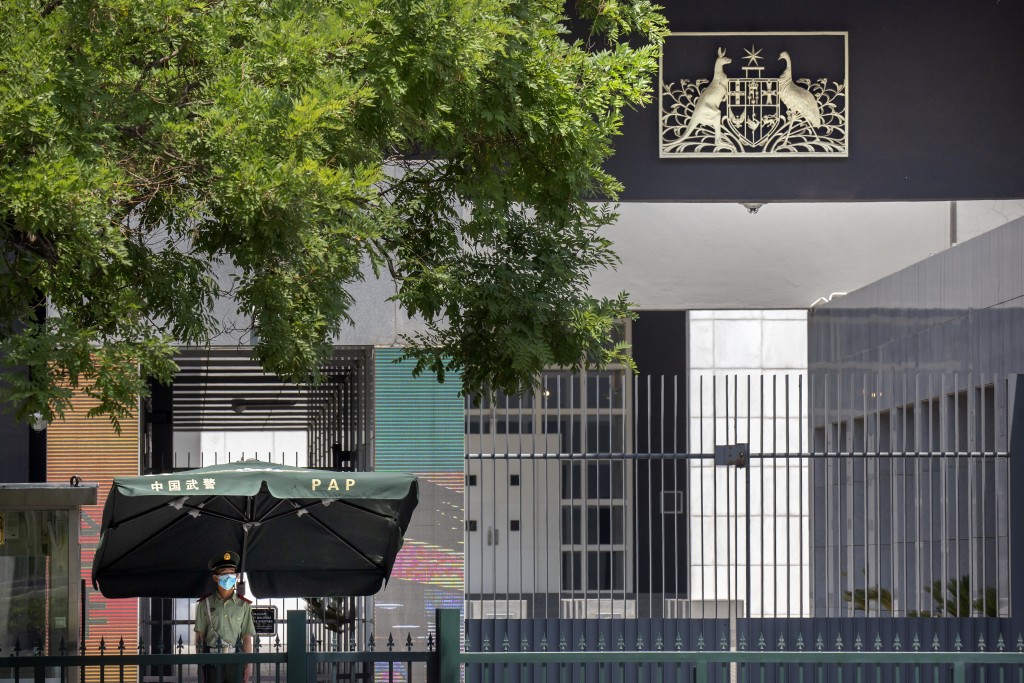 CANBERRA, Australia (AP) — The Chinese Embassy on Wednesday dismissed Australia’s warning to travelers of arbitrary detention in China as “ridiculous” and “disinformation” in the latest diplomatic spat to mar a deteriorating relationship.

Australia’s Department of Foreign Affairs and Trade said on Tuesday in an updated travel advisory for China that authorities have detained foreigners because they’re “endangering national security,” adding that Australians may also be at risk.

China's embassy in Australia replied in a statement: “This is completely ridiculous and disinformation.”

“Foreigners in China, including the Australians, as long as they abide by the Chinese laws, have no need to worry at all,” the statement said.

It is not clear what prompted the warning, which comes as relations between the free trade partners have plummeted over Australia’s calls for an independent investigation into the coronavirus pandemic, which was detected in China late last year.

Prime Minister Scott Morrison on Wednesday appeared to distance himself from the issue, saying travel advice was the responsibility of bureaucrats.

“From time to time, travel advisories are changed and on this occasion, the officials have upgraded that advice,” Morrison told reporters.

The embassy said criminals are dealt with according to Chinese law, mentioning drug smuggling and espionage — crimes for which Australians are currently in Chinese detention.

Australian Karm Gilespie was sentenced to death in China last month, seven years after he was arrested and charged with attempting to board an international flight with more than 7.5 kilograms (16.5 pounds) of methamphetamine. Some observers suspect that such a severe sentence so long after the crime was related to the bilateral rift.

Morrison will soon further antagonize China when he reveals his government’s plans to offer safe haven to Hong Kong residents threatened by Beijing’s move to impose a tough national security law on the semi-autonomous Chinese territory.

“We continue to be concerned about issues in Hong Kong,” he said.

Asked if China and Hong Kong were safe destinations for Australians, Morrison’s deputy in the ruling conservative Liberal Party, Josh Frydenberg, told the Australian Broadcasting Corp.: “It is a situation that is fluid.”

“Australians have to be very cautious. But if they go about their ways in a safe manner, then hopefully they have nothing to fear,” said Frydenberg, the government’s treasurer.

“We want Australian businesses to thrive and prosper, whether it’s Hong Kong, China or elsewhere. They have to be very conscious though of some of the risks, and we undertake objective assessment of those risks and that is reflected in our travel advice ... which has been upgraded because we have been concerned about arbitrary arrests and detention,” he added.

The new advisory is unlikely to affect travel plans since Australia has already banned its citizens from leaving the country during the pandemic. Australians in China who wish to come home were advised to do so as soon as possible.