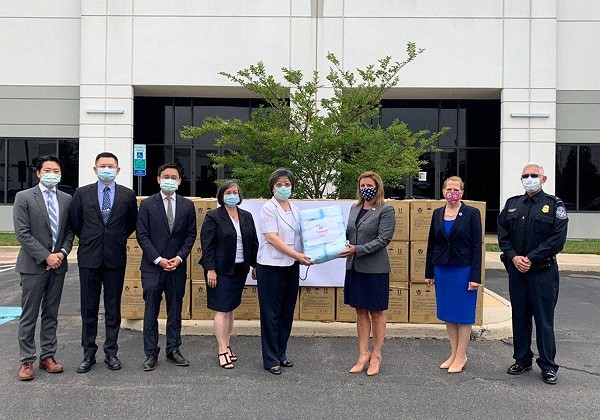 TAIPEI (Taiwan News) — Taiwan has donated a total of 300,000 surgical masks to the U.S. Department of Veterans Affairs (VA) to help protect American service members against the ongoing coronavirus pandemic.

As the U.S. continues to wage battle against the infectious disease, the Taiwanese government has once again realized its motto, "Taiwan can help and Taiwan is helping." In an outdoor ceremony Wednesday morning (July 8), Christine Hsueh (薛美瑜), deputy representative of the Taipei Economic and Cultural Representative Office to the U.S., presented Taiwan's donations to VA Acting Deputy Secretary Pamela Powers, who graciously accepted the timely gift.

Powers is the highest-ranking U.S. official to have attended such a ceremony organized by the Taiwanese government since the outbreak began, according to CNA.

This morning, a delegation from Taiwan donated 300,000 surgical masks to VA. Acting Deputy Secretary Pamela J. Powers was on hand to graciously accept the gift on behalf of the department and America’s Veterans. pic.twitter.com/I2BuRxZ4rL

According to statistics provided by the John Hopkins University Coronavirus Resource Center, nearly 11.8 million individuals have contracted the virus worldwide, including three million who were reported in the U.S.