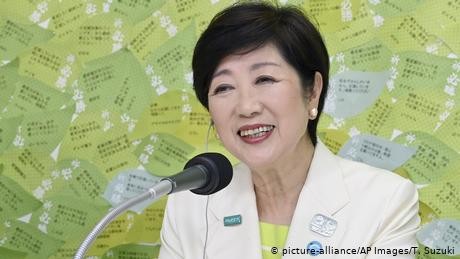 Yuriko Koike remains the most powerful female politician in Japan. Though she ran as an independent candidate without any party backing in Sunday's gubernatorial election, she won more than 60% of the votes, prevailing over 21 other candidates.

Some 3.7 million of the city's 14 million inhabitants voted for her; by contrast, only 844,000 voted for her strongest rival, the 73-year-old lawyer Kenji Utsunomiya.

Koike can thank her decisive handling of the coronavirus pandemic for her success. In a TV poll, 10,000 Tokyo inhabitants praised her "communication" and "leadership" skills.

A smear campaign that questioned her academic qualifications and implied that she had not received a diploma from Cairo University failed to stop her.

During her campaign, the 67-year-old politician promised to turn Tokyo into the "safest and healthiest city in the world."

With over a third of Japan's 20,000 COVID-19 cases, Tokyo is the country's pandemic hotspot. But while Prime Minister Shinzo Abe was still hesitating to take action, Koike was already pushing for drastic measures to contain the virus.

She announced there would be financial compensation for restaurants and other businesses forced to close in Tokyo before the national government introduced similar measures.

She also that the Olympic Games, which have been postponed to 2021, be "trimmed down" for safety reasons also went down well with those not so keen on the event.

In her first press conference after the election she continued to focus on health. "I will protect Tokyoites' lives and livelihood against the coronavirus and devise an economic strategy," she promised.

However, Koike has made promises before. She pledged to put an end to the corruption of her predecessors four years ago. She also vowed to address the disfiguring abundance of overhead power lines in Japan's capital. But little came of these promises.

Yes, Tokyo has more kindergarten places than before and more electric-vehicle charging stations, but both of these facts can be attributed to the central government.

Though she said that she wanted to make Tokyo more diverse, this has also happened without her doing anything: The Japanese capital draws people not only from rural areas of Japan but also from China and Vietnam looking for work.

Koike has opposed permitting foreigners with permanent residency to vote in local elections. She is also not in favor of granting legal recognition to same-sex couples.

So the coronavirus pandemic came at the right time for Koike. Voters preferred to reward her for her decisive action rather than punish her for what she has failed to do.

Koike's recent landslide victory has fueled speculation that she might try to run for prime minister again.

"It's a natural course of action for Koike to return to national politics after securing her place as Tokyo governor," said Naoto Nonaka from Tokyo's Gakushuin University.

In the 2017 general election, Koike formed her own Party of Hope, which ran against Abe's Liberal Democratic Party (LDP) but performed very badly. However, her fresh success has now blurred the memory of this abject failure and spurred her ambitions.

Some predict that she will throw her hat in the ring after the Olympic Games, if they are a success. Prime Minister Abe's term is due to end a few weeks later.

But for Koike to have a chance at all, she would have to rejoin the LDP and become its leader. There are rumors that she is attempting a rapprochement with the party that she left in 2016. The LDP did not put up a candidate against her in the gubernatorial election.

"She has learned the hard way that it is not wise to go against the LDP," said Masahiro Iwasaki from Nihon University in Tokyo.

A conveyer belt of different policies

Still, it will not be easy. In contrast with most Japanese politicians, Koike has not remained loyal to one party in the past and has earned the nicknames "Migratory bird" and "Madame Kaiten Sushi," after the conveyer belt that carries different sushi dishes around a restaurant.

She has also preferred to reject convention and breach taboos rather than to position herself clearly on the political spectrum.

As environment minister, she encouraged a more casual dress code in summer months to save on air-conditioning costs, currying favor with the liberals. Later, she cozied up to the right and proposed a new constitution.

Such behavior has brought accusations of opportunism. Koike knows how to nurture her image and make promises, but does not follow up on them. According to a survey by the political newspaper Tosei Shimpo, only 21% of officials in her prefecture wanted her to remain in office.

A recent biography called "Empress Yuriko Koike" wonders whether she is a savior or a monster. The ambivalence reflected in the book leads some observers to doubt that Yuriko Koike will become the first female prime minister of Japan.