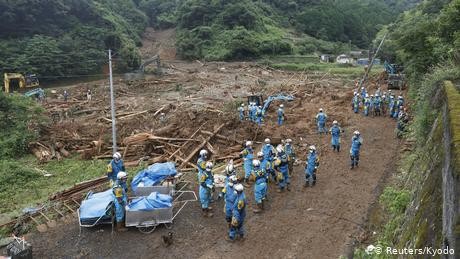 Nearly 1.2 million people have been asked to leave their homes as Japan's southern region of Kyushu continues to be lashed by heavy rainfall that began over the weekend. The resulting floods have led to 50 deaths, local authorities confirmed on Tuesday.

According to the Fire and Disaster Management Agency, 49 deaths were from riverside towns in Kyushu's Kumamoto region. Another death was reported from Fukuoka, which is further north. Authorities say at least a dozen people are still missing.

Kyushu, the third largest of Japan's islands, is facing heavy torrential rains, which has led the Japan Meteorological Agency to issue an emergency warning for the prefectures of Saga, Nagasaki, and Fukuoka.

Kumamoto remains the worst affected with landslides and flooding making it difficult for search and rescue operations to be carried out effectively.