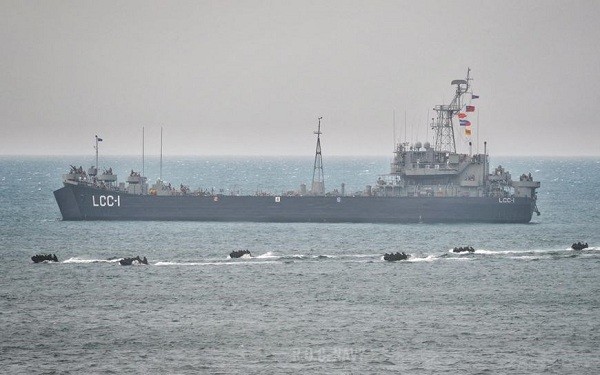 One of the soldiers who fell overboard during a military drill on Friday passed away early Sunday, the Navy Command said in a statement.

The Navy expressed condolences to the family of the 26-year-old soldier, surnamed Tsai (蔡), and said posthumous promotion, compensation and funeral assistance will be given to him and his family, according to the statement.

The Kaohsiung Armed Forces General Hospital Zuoying Branch confirmed that Tsai was declared dead 36 minutes past midnight after his family decided to give up on resuscitation efforts.

The soldier was one of the seven-member Marine Corps team who fell into rough seas during the drill on Friday to simulate a response to enemy forces landing in Taiwan.

Their rubber craft overturned in waters off Taoziyuan beach in Kaohsiung.

Three of the four soldiers who were rushed to the hospital, including Tsai, a 36-year-old sergeant and a 34-year-old sergeant, all male, were taken to intensive care units with pulmonary edema, a condition caused by an abnormal amount of fluid in the lungs.

According to media reports, the ill-fated soldier was found by other participants of the drill two hours after the others were rescued.

President Tsai Ing-wen (蔡英文) said she is deeply saddened by the soldier's death. She has ordered a thorough investigation into the incident and will come up with measures to prevent such accidents from happening again, she added.

The president also said she has instructed the Ministry of National Defense to provide utmost care and support to the victims of the accident and to their families.

Meanwhile, the hospital is still trying to revive the other two, who are now on life support.

In a press release Saturday, the Navy Command said initial findings of an investigation into the accident showed that it was caused by an unexpected surge of waves.

The landing drill was being held in preparation for the annual Han Kuang military exercises that are slated to take place July 13-17.

Several fatal accidents had occurred in previous Han Kuang exercises, including the crash of an F-16 jet fighter in June 2018 that claimed its pilot's life, and the fall of a CM-11 tank into a river in August 2016 that resulted in four deaths.