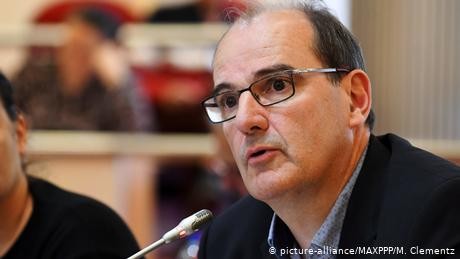 Politics is brutal in France: The movers were lugging boxes out of the Hotel Matignon, the prime minister's residence, at 10 a.m. Edouard Philppe had been ditched for all of Paris to see.

President Emmanuel Macron had warm words for the departing deputy, and then two hours later the name of his replacement began to leak: Jean Castex. Thus, a high-ranking political functionary with a low-profile will now take his place in the government's ejection seat.

A quick glance at the list of French prime ministers since the beginning of the Fifth Republic reveals that some barely lasted a year. When something goes bad, they are immediately banished from court. Edouard Philippe served three years in the job, quite a feat. He was also very good at it, and always covered Macron's back. The two are said to have had a good relationship. The government survived both the political turmoil of the yellow vest movement and never-ending strikes against pension reform.

A prime minister in France is less an independent politician than the executor of the president's policies — Philippe probably wasn't helped by the fact that he had become more popular than the president. The outgoing prime minister was sent off with a long-standing ovation and thunderous applause. His replacement Castex said: "You were the head of government who was confronted with the worst health crisis Europe and the world have seen in decades." Edouard Philippe's approval rating when he left office was 58%, 20 points ahead of Macron.

But his firing was not about jealousy. For weeks rumors have been swirling that Macron is planning to launch a political makeover this summer. That will likely mean the whole Cabinet will go and new faces will be brought in to convincingly embody a change of direction.

Results from last Sunday's municipal elections will have strengthened Macron's conviction. His Republic on the Move (LREM) party was badly beaten at the polls. The party still seems more like a presidential election society and has never managed to get a foot in the door on the local level. Instead, it was the Greens who rode a wave of victories across the country, winning several major cities along the way.

The current situation only increased the bewilderment some saw in Castex being named prime minister. The only thing the public really knows about him is that he has been responsible for co-ordinating France's post-lockdown reopening. Beyond that, the politician from Gers, in the heart of the country, is known as a low-profile functionary who operates out of the spotlight. Among other things, Castex served as a high-level administrator under conservative President Nicolas Sarkozy.

Thus, a successful conservative prime minister will now be replaced by one further to his right. Castex is not known to have any social or environmental interests. Political observers in Paris reacted with disappointment, with some tweeting: "More of the same — it's déjà-vu." Castex is also a product of Paris' elite universities and thus part of France's traditional political class. But whatever he is, he is not the person to break with the past three years of government policy.

In naming Castex, Macron passed over Defense Minister Florence Parly — a female Socialist who would have clearly signaled political change. He also passed over Jean-Yves Le Drian, his highly experienced foreign minister — a man who knows the ins and outs of the government like no other. And as a Socialist he, too, would have symbolized a shift to the left.

Instead, the president has chosen a political insider with no profile of his own, a man who can silently implement Macron's policies without stealing his spotlight.

Enormous tasks ahead of 2022

There is a lot to do in France; rebuilding the economy will be extremely difficult with the coronavirus pandemic still looming. And the president has lost ground on all fronts, with the crisis wiping out progress made on unemployment and economic growth. Emmanuel Macron must now start all over again, and there are less than two years before the presidential election in the spring of 2022.

The first order of business will be to incur as little new damage as possible while steering the country out of the most acute phase of the coronavirus. Of the projects left unfinished as a result of the pandemic, pension reform is one of the biggest. It is still to be implemented, but in a somewhat watered-down form — Macron can't afford to anger voters at this point.

But France also has a rising mountain of debt and needs to maintain expensive social spending. Moreover, Macron has to make up ground lost to the Greens: Transforming France into an economically sustainable country with improved public transport and a shift away from fossil fuels will cost money. The president has reacted by appointing a head of government tasked with one thing: to quietly do his job.