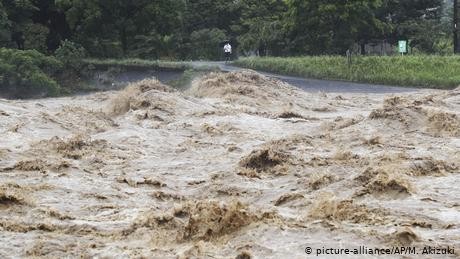 Japanese authorities have ordered some 76,500 people in Kumamoto and Kagoshima prefectures on the southwestern island of Kyushu to seek refuge amid downpours that were called unprecedented in some regions.

Thirteen people were reported missing on Saturday after overnight rains pounded down, initially inundating parts of Kumamoto with an estimated 100 millimeters (4 inches) per hour.

Prime Minister Shinzo Abe said thousands of troops were being sent to Kyushu to help in rescue operations, calling on people in the area to remain on "maximum alert." He said the utmost would be done to rescue the missing.

Television reports showed houses and cars submerged in muddy waters from a flooding Kuma River in Kumamoto. Several people were seen standing on top of a store waiting to be rescued.

Abe said the rains were expected to continue into Sunday.