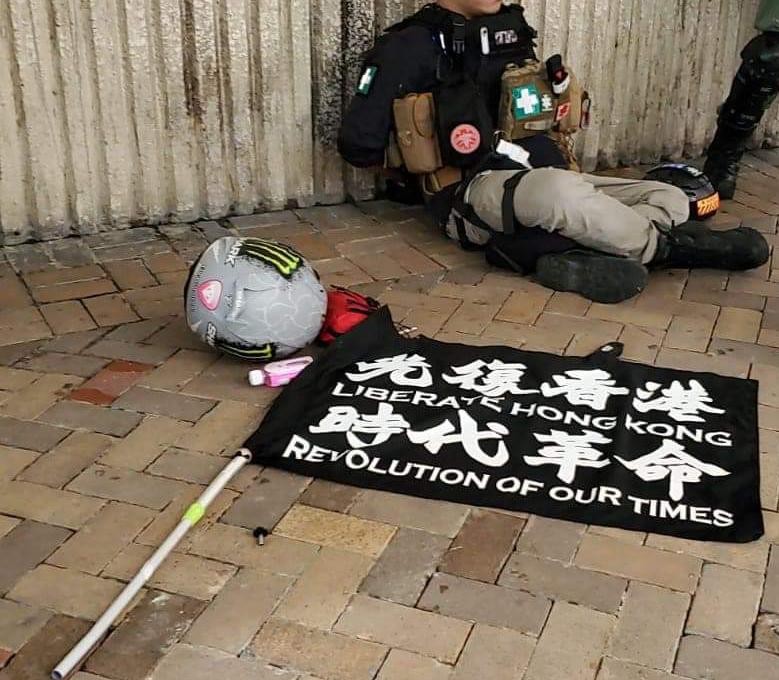 The 23-year-old Tong Ying-git (唐英傑) was accused of attacking police on O'Brien Road in the Wanchai area on Wednesday (July 1).

He reportedly crashed into three police officers with his motorcycle, to which was attached a flag saying, "Liberate Hong Kong, Revolution Of Our Times." The Hong Kong government now regards this slogan as illegal for encouraging Hong Kong independence.

According to the charge, the flag "incites others to organize, plan, or participate in activities with a view to subverting state power and separating Hong Kong from the People’s Republic of China." His attack on police was called a terrorist activity that "causes grave harm to society with a view to coercing the government to pursue a political agenda."

In the worst-case scenario, Tong will face 10 years up to life imprisonment for each of the two charges. He is currently being treated for multiple fractures at Pamela Youde Nethersole Eastern Hospital.

Also on July 1, a man assaulted a police officer with a knife while a group of people tried to free a protester subdued by police. After the attack, the man sought to flee the city for London.

His Cathay Airways flight was preparing to take off at 11:55 p.m. on July 2 but was recalled at the last minute. Police then stormed the plane to arrest the 24-year-old suspect.