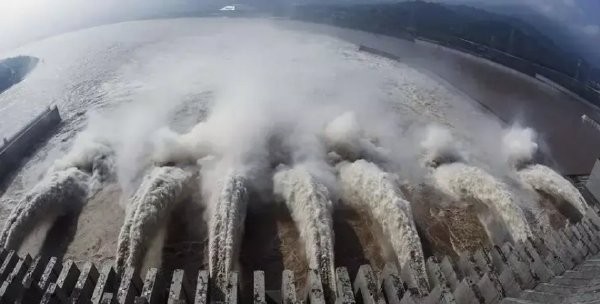 TAIPEI (Taiwan News) — As torrential rain ravages southern China for the second straight month, the government has issued a number for a massive flood of the Yangtze River Basin, which threatens to further overload the Three Gorges Dam.

A "No. 1 Flood" has been announced for the Three Gorges Dam headwaters. According to China's major river numbering regulations, when the inflow of the Three Gorges reservoir reaches 50,000 cubic meters per second and the water level in the middle reaches of Lianhuatang rises to the warning level, the flood will be assigned a number.

With the China Meteorological Administration (CMA) on Thursday (July 2) issuing a heavy rain warning across China for the 31st straight day, netizens continue to speculate about the integrity of the Three Gorges Dam as it faces its greatest test since completion in 2003. Although Chinese officials have repeatedly labeled fears the dam could suffer a catastrophic collapse as "nonsense," the region continues to be battered by heavy flooding, landslides, and on Thursday an earthquake.

At 4:07 a.m. on Thursday, a magnitude 3.2 earthquake rattled Zoige County in Sichuan Province at a shallow depth of 8 kilometers, according to the China Earthquake Networks Center. Though an extremely shallow earthquake with a focal depth of 8 km, it raised concerns that landslides could threaten the safety of the dam.

At noon the same day, the Changjiang Water Resources Commission (CWRC) issued an urgent warning that the upper reaches of the Yangtze River would witness the "Yangtze River's No. 1 flood of 2020" (長江2020年第1號洪水). By 10 a.m., that day, the CWRC reported that the inflow of water to the Three Gorges Reservoir would be 50,000 cubic meters per second, matching the rate seen in the 1998 floods. Due to the incessant rain, the water level in the upper reaches of the Yangtze River, Wu River, Three Gorges Region, and Dongting Lake water system will "increase significantly," and the water levels of each station in the middle reaches of rivers will continue to rise. On Wednesday (July 1), Xinhua cited Ministry of Water Resources (MWR) official Wang Zhangli as saying that since June, 250 rivers across China have witnessed floods above warning levels, primarily in Guangdong, Guangxi, Guizhou, Hunan, Hubei, Jiangxi, Sichuan, Chongqing, and Anhui.

The CWRC has issued a "blue alert" for the Wujiang River, the Three Gorges Reservoir Region, and upper reaches of the Yangtze River. As of 7 a.m. on Thursday morning, the inflow into the Three Gorges Reservoir had reached 47,000 cubic meters per second and was to climb to 50,000 by 2 p.m., with the water level at Wulong station on the Wujiang River rising to 191.7 meters and the level at the middle reaches of Lianhuatang surging to 31.68 meters.