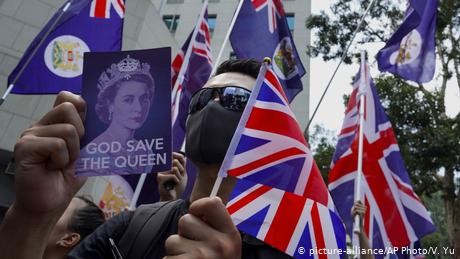 China warned the UK on Thursday it could retaliate with "corresponding measures" following the UK's decision to extend a broader path to British citizenship for residents of Hong Kong.

The Chinese embassy in London issued a statement stressing that "all Chinese compatriots living in Hong Kong are Chinese nationals."

"If the British side makes unilateral changes to the relevant practice, it will breach its own position and pledges as well as international law and basic norms governing international relations," the statement continued. "We firmly oppose this and reserve the right to take corresponding measures."

In a press conference, a Beijing spokesperson "condemned" the UK's decision and said they were not keeping their promises on Hong Kong. The spokesperson warned of "consequences."

The Hong Kong police made hundreds of arrests Wednesday under a controversial new so-called security law in the Chinese-administrated area. Some were arrested for waving flags or "conducting themselves with intent such as secession or subversion." Hong Kong has seen widespread pro-independence and pro-democracy protests over the last year.

'The flame of freedom is precious'

UK Foreign Secretary Dominic Raab pledged that Britain will offer citizenship to around 3 million Hong Kong residents who have British National Overseas passports or who are eligible for one.

"We stand with the people of Hong Kong," junior minister Simon Clarke told broadcaster Sky News on Thursday. "The flame of freedom is very precious and we made guarantees to those people when we left Hong Kong and so we will do whatever is required, that is within our power, to make sure that this is upheld."

Australian Prime Minister Scott Morrison also announced Thursday that his government is considering offering "safe haven visas" to Hong Kong residents who may be in danger due to the so-called security law. China's Foreign Ministry quickly issued a statement urging Australia not to interfere in China's internal affairs.

Hong Kong was under British jurisdiction until 1997 when it was handed over to China. A key part of the handover deal was that Beijing would preserve the city's judicial and legislative autonomy, a promise that critics say has been violated.

Taiwan has warned citizens against unnecessary travel to Hong Kong and their de facto consulate in the city described the new law as "the most outrageous in history." They said they received over 180 inquiries from Hong Kongers about their legal status in Taiwan on the first day of the law being in place.

Wednesday's clashes with police took place on the anniversary of the handover. While most protests were apparently peaceful, one man was arrested on Thursday morning after allegedly stabbing a police officer.

Authorities say the 24-year-old had boarded a flight to London but was detained and taken off the plane. Police posted a video on social media on Wednesday of a police officer bleeding from his arm.

The UK has sought closer relations with China since they left the European Union in January 2020.

UK media reported that British officials summoned the Chinese ambassador to meet later in the day following the publication of the statement, after China said the UK should "refrain from interfering in Hong Kong affairs in any way."