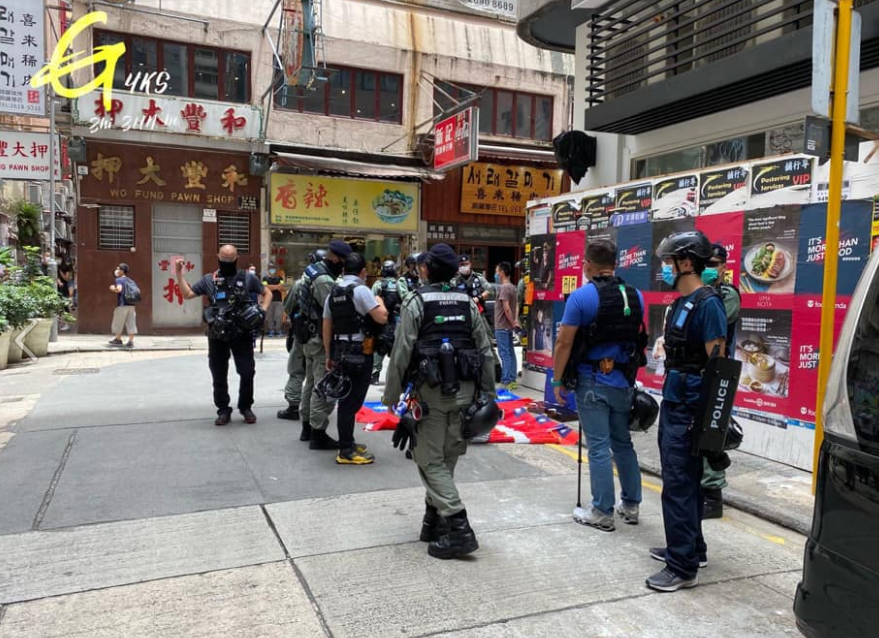 The new law faced widespread global condemnation, as it was seen as a breach of the 1997 handover agreement promising the residents of the former British colony “One Country, Two Systems” for 50 years.

Protesters took to the streets of Hong Kong Wednesday, but by 6 p.m., at least 180 had been arrested, including seven for specific breaches of the national security law.

While several of the detainees reportedly carried banners advocating independence for Hong Kong, one man was led away by police because his bag contained 30 Taiwanese national flags, Liberty Times reported.

According to an eyewitness, a Hong Kong photographer identifying as YKS, police spread the flags of varying shapes and sizes out on the pavement so they could take pictures of the evidence.

While the contents of the national security law had been published on the eve of July 1, after China had approved it, AFP correspondent in Hong Kong Jerome Taylor said Taiwan’s flag should not be a problem.

“A Hong Kong police source tells me that displaying or owning Taiwan's (ROC) national flag will not be considered a breach” of the new law, he tweeted. “Flags promoting Taiwanese independence would be, however.”

Taiwan’s national flag was created by the Kuomintang (KMT) to represent the Republic of China before the communists took power in 1949. While China has banned the flag, Taiwan independence supporters often reject it as a symbol of KMT oppression and that party’s quest for unification with China.