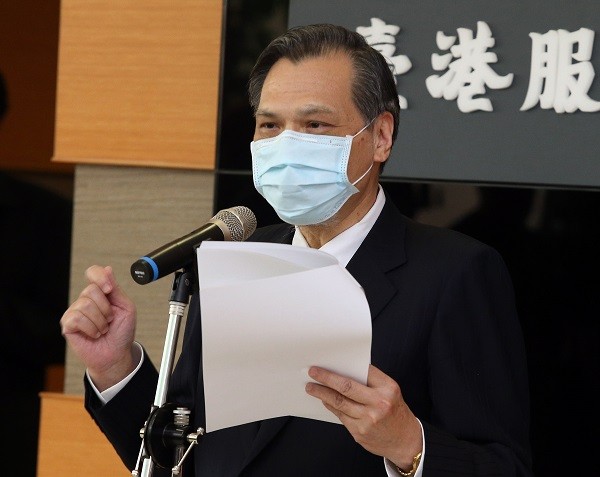 TAIPEI (Taiwan News) — Taiwan's Mainland Affairs Council (MAC) Minister Chen Ming-tong (陳明通) on Wednesday (July 1) said that China's new draconian security law imposed on Hong Kong not only applies to Hongkongers and Taiwanese, but to "all the people of the world."

During the opening ceremony for the new Taiwan-Hong Kong Services and Exchanges Office in Taipei's Da'an District to aid Hongkongers oppressed by the new heavy-handed security law, Chen described the legislation as "a decree issued by the Celestial Empire to the people of the world." When asked whether the new law would affect Taiwanese visiting Hong Kong or cause them any problems, Chen listed Articles 38 and 29 as having direct implications for not only Taiwanese citizens but for all foreign nationals, both in and outside of Hong Kong.

Chen first read Article 38, which states: "This Law shall apply to offences under this Law committed against the Hong Kong Special Administrative Region from outside the Region by a person who is not a permanent resident of the Region." Chen then said that this in effect means that the law applies not just to Hong Kong people and Taiwanese people, but to "all the people of the world."

As to what kinds of crimes foreigners could be charged with, Chen then cited Article 29 section 2, which refers to "seriously disrupting the formulation and implementation of laws or policies by the Government of the Hong Kong Special Administrative Region or by the Central People’s Government, which is likely to cause serious consequences." He then read section 5, which lists "provoking by unlawful means hatred among Hong Kong residents towards the Central People’s Government or the Government of the Region, which is likely to cause serious consequences."

Chen said, for example, if an American journalist in the U.S. were to publish a report criticizing the Chinese regime, which was then labeled as inciting hatred among Hongkongers toward the regime, the journalist could be subject to the law. Chen closed by saying that not only Hong Kong and Taiwanese citizens must pay close attention to the new law, but "all citizens of the world must face it seriously."