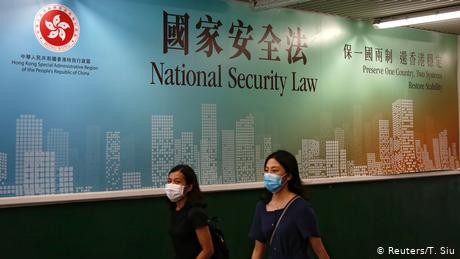 After weeks of anxious waiting, China's National People's Congress unveiled the full text of the national security law for Hong Kong. The law is expected to "utterly change" the lives of the more than seven million people who live in the semi-autonomous Chinese city.

The law lists subversion against the Chinese government, terrorist activities and collusion with foreign forces as key criminal offenses. The maximum punishment for national security crimes includes life imprisonment. Past behaviors deemed illegal under the new law could also be used as a reference for criminal prosecution.

While Beijing announced its plan to introduce the law at the end of May, the legislative process was carried out behind closed doors. At the time, Hong Kong government officials were not given access to the full text of the law and even the city's Chief Executive Carrie Lam admitted on June 23 that she hadn't seen the full text.

"When you intend to pass laws that seriously affect the lives of seven million people, you make sure you have open consultation. You listen to opinions and you are ready to modify the content of it," Hong Kong barrister Margaret Ng told DW. "This whole process is secretive because Beijing doesn't want to hear any objection and Chinese authorities don't want to give anyone a chance to criticize the law."

Beijing's 'final piece of the puzzle'

The Hong Kong government is set to establish a national security council headed by a chief executive as well as a new central government commission.

Albert Ho, a Hong Kong politician, told DW that the council will become the highest executive body in Hong Kong and enable Beijing to supervise local authorities in executing the law.

"The interpretation of this law rests in the hands of the National People's Congress' Standing Committee," Ho said, adding: "When there are all these super powerful institutions established, how can Hong Kong people be rest assured that their freedom and liberty would not be in danger?"

In addition, the executive chief will also be able to select judges to handle national security cases, which experts warn could jeopardize the city's judicial independence.

"Once you are able to choose which judges can handle the case, then you no longer have any judicial independence … I think that's quite obvious," Ng said.

The national security law is the final piece of the puzzle for Beijing to fulfill its "one country, one system" in Hong Kong, according to Ng. "The central government's special commission can command the Hong Kong government to do anything, which makes Hong Kong an agency for the central authorities… it will utterly change lives in Hong Kong," she said, adding that there will now be "even less room for any kind of moderate stand in the city."

In addition to the lack of transparency surrounding the security law's legislative process, Beijing's choice of timing to impose the law has raised eyebrows.

Local media reports have suggested that the Chinese government is looking to finalize and implement the security law before July 1, which many suspect could allow Beijing to interfere with Hong Kong's upcoming legislative council election in September.

Ng views the law as a loophole for the Beijing and Hong Kong government to disqualify certain candidates, thereby preventing opposition from claiming a majority in the legislative council.

"Beijing can't prevent millions of people from voting, but they can remove candidates by disqualifying them," the barrister explained. "The national security law will be used as a reason to disqualify people they worry about the most, but the question is how many can they disqualify?"

In the future, Ho predicts that the Hong Kong government could use the national security law to restrict public activities that once were considered "legal."

"If the government uses unreasonable excuses to ban certain activities, I expect Hong Kong people to resist by exercising their rights of civil disobedience," the politician said, adding: "We should understand the way similar laws work in China, and we can anticipate certain speeches being categorized as inciting subversion of state power." But at the same time, Ho also hopes Hong Kongers won't "lose liberty and face the possibility of going to jail."

Pro-democracy figures in Hong Kong also worry that once the law comes into effect, the city's core values will be undermined.

Jimmy Lai, a prominent Hong Kong media tycoon and a pro-democracy figure regularly labelled as a 'threat to national security' by state-run media outlets, described the law as a "death knell" for Hong Kong.

"The law supersedes Hong Kong's Basic Law and our rule of law, which also means it will be the end of Hong Kong's status as a global financial center," Lai told DW. "Without the rule of law, no one who conducts business in Hong Kong can enjoy any protection unless they choose to bribe officials who have power over you. Hong Kong will become just another Mainland Chinese city."

Lai said that while a spirit of resistance is still strong in Hong Kong, he thinks it is inevitable that many are planning to leave the city permanently.

"I'm sure a lot of people are slowly preparing to go away, because I don't see how Hong Kong as we know it can survive," he said. "My message to them: please take care of yourself if you decide to leave Hong Kong. We are thankful for what you have done for Hong Kong and we will stay and continue our fight."