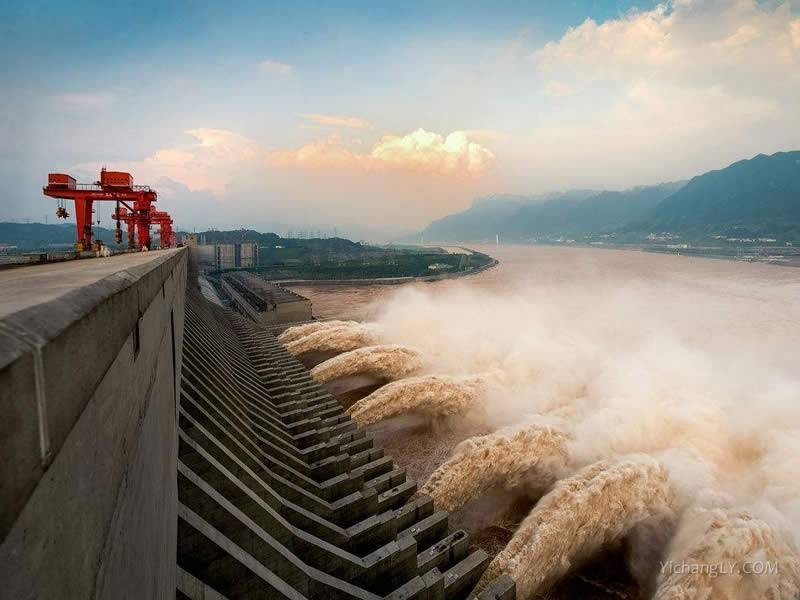 TAIPEI (Taiwan News) — After videos of flooding in cities below the vaunted Three Gorges Dam surfaced over the weekend and residents complained that they were being sacrificed to save the dam, the Chinese government on Monday (June 29) finally admitted that it had released floodwaters from its spillways for the first time this year.

On Saturday (June 27), videos began to surface on social media showing intense flooding in Hubei Province's Yichang City, which lies directly below the Three Gorges Dam. Residents suspected that the flooding was related to an emergency flood discharge from the sluices of the monster dam.

The Chinese government initially claimed that the dam was only engaged in standard "power generation" operations. However, on Monday, Beijing finally admitted that the dam had implemented its first "floodwater discharge" (洩洪) of the year and that a new wave of flooding is heading toward the Three Gorges catchment area, which covers one million km².

Due to heavy rainfall in the middle and upper reaches of the Yangtze River, the flow of water into the Three Gorges Reservoir has continued to increase. On Monday, China's state-run mouthpiece Xinhua News Agency reported that the dam's operators had opened two spillways that morning, marking the first official flood discharge from the mammoth structure this year. According to the report, at 8 a.m. that morning, 34 of the dam's generators were fully operational and close to full capacity. The state-run outlet predicted that from July 1 to 2, there will be moderate to heavy rain near the tributaries of the upper Yangtze.

By July 3, it predicted heavy rain and local rainstorms will occur in the upper reaches of the Jialing River and the upper Han River. The report also warned that the Three Gorges Reservoir may experience renewed flooding from early- to mid-July.

Meanwhile, the China Meteorological Administration (CMA) on Tuesday morning (June 30) issued a blue alert for heavy rain in southern and southwestern China for June 30 at 8 a.m. to July 1 at 8 a.m. This is the 29th consecutive day that China has issued a heavy rain warning across the country.

Xinhua reported that there had recently been heavy rainfall on the Wujiang, Minjiang, and Tuojiang rivers in the upper reaches of the Yangtze River. The news outlet claimed that the inflow of the Three Gorges Reservoir began to increase on Saturday afternoon.

Previously, Chinese state media had claimed that the Three Gorges, Gezhouba, Xiluodu, and Xiangjiaba dams were making full efforts to "generate electricity." However, some Hong Kong news outlets alleged that the "power generation" of the Three Gorges facility was actually an emergency flood discharge to prevent the dam from the threat of collapse.

Radio Free Asia (RFA) cited Zhang Jianping, a Chinese human rights activist based in Jiangsu, as saying that those who had opposed the construction of the monstrous dam were right. "Since it was built, it has never played a role in preventing flooding or droughts, like we thought it would back then." He added that "There used to be big rains [plum rains] at this time back in the countryside, and they were heavier than this, but we were never flooded."

The news agency also spoke to a resident of Hunan's Xiangyang City who said, "I heard that the Three Gorges Dam and Gezhou Dam, which are upstream, are currently in full flood relief mode." He then pointed out that flood season has yet to officially begin: "The main flood season in the Yangtze river basin is usually July and August."

Video appearing to show many more spillways releasing a massive quantity of water:

Heavy rains have increasing the amount of flood discharge forcing the state to open the gates, this will undoubtedly worsen Yichang and downstream cities and leave millions homeless due to excessive flooding#China #Weather #3GD pic.twitter.com/Izm8phW1tC

*edit*#China, a valley city rests under several metres of water a few hundred km downstream from the #3gorgesdam
#XiJinping's lust for power has cost him the "Mandate of Heaven", the goddess of the yellow river has unleashed her furry onto the heartland of the Hans.#Weather pic.twitter.com/J6tQYGqUL0

This is #Wuhan starting to flood because of the release of water from the #ThreeGorgesDam further up stream. It seems this city can’t catch a break. pic.twitter.com/2baKhZ23Dj

The flood has reached Wuhan with some eerie soundtrack. #China Wuhan was flooded this morning, as it was continuously raining for the past week along the Yangtze river, many cities along the Yangtze flooded including Chongqing, Yichang, and now Wuhan.