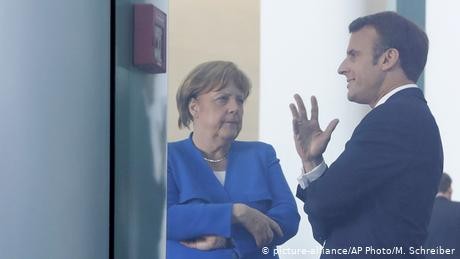 German Chancellor Angela Merkel hosts French President Emmanuel Macron on Monday to discuss Berlin's upcoming presidency of the EU, with members of the bloc still unable to agree on a definitive coronavirus policy.

The pair are due to meet at the German government's official guest house at Meseberg, north of the German capital.

A €750 billion ($840 billion) rescue plan is envisaged with grants offered by the European Commission that there would be no obligation to repay. Opposing that idea are the so-called "Frugal Four," Austria, Denmark, the Netherlands and Sweden, who are opposed to any pooling of member states' debts.

The French president last week visited Dutch Prime Minister Mark Rutte in The Hague last week, and was reported to have made some progress. A source from the Elysee Palace last week said the country remained optimistic that a deal could be struck, but admitted "we are not there yet."

Climate change, trade and migration are also high on the agenda.

The meeting comes just days before Germany takes over the rotating presidency of the EU.

In an interview published on Saturday, European Commission President Ursula von der Leyen said it was "very fortunate that Germany is taking over the presidency at this time of a major crisis."

Von der Leyen said that the experience of Merkel, who has been chancellor since 2005, was "enormously" helpful.