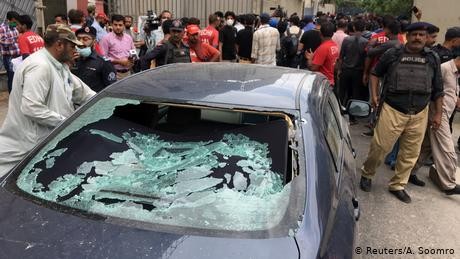 Armed men attacked the Pakistan Stock Exchange building in Karachi on Monday, and four of the assailants were killed, police said.

The gunmen attacked the building with grenades and guns, according to local media reports.

Read more: Has China-Pakistan Economic Corridor lived up to the hype?

Rizwan Ahmend, a police official at the scene of the attack said that gunmen opened fire at the entrance and entered the stock exchange grounds. It was not immediately clear if more assailants are at large.

"An unfortunate incident took place at the Pakistan Stock Exchange," Abid Ali Habib, the director of the exchange, told Geo News. "They made their way from our parking area and opened fire on everyone."

Heavily armed special forces have surrounded the building, and local television stations have shown police in full body armor surrounding the structure. Shazia Jehan, a police spokesman, said a bomb disposal squad had also been called to the building and was trying to clear it of explosives.

Karachi is Pakistan's financial center, and home to the Pakistan State Bank, as well as several national and international financial institutions.