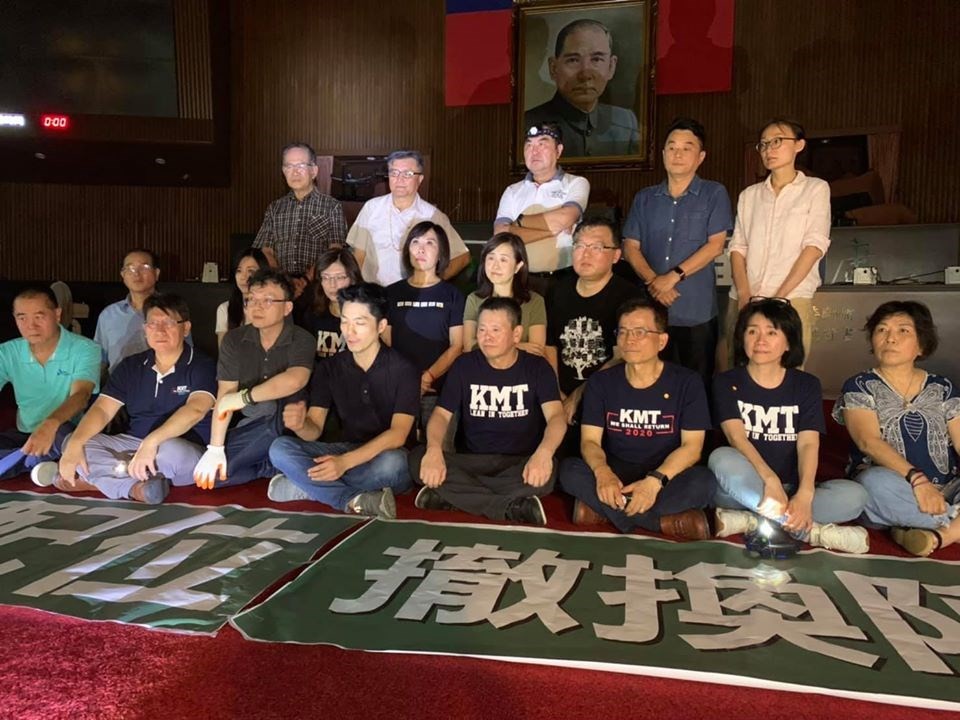 2:38 p.m. Update: At 12:20 p.m., Legislative Yuan President Yu Shyi-kun (游錫堃) entered the Legislative Yuan under the protection of DPP legislative councilors and called for the convening of a legislative committee meeting to discuss the proposal to hold an interim party congress. After the council members read out the proposal, they immediately proceeded to vote on a possible interim meeting.

After a series of other votes, Yu announced the ending of the committee meeting. However, DPP legislators continued to stand at the rostrum to avoid it being occupied by the KMT again.

TAIPEI (Taiwan News) — More than 20 Kuomintang (KMT) legislators broke into the Legislative Yuan on Sunday (June 28) and occupied the building in protest of President Tsai Ing Wen’s (蔡英文) nomination of Chen Chu (陳菊) as the head of the Control Yuan, the nation’s government watchdog.

As of 7 a.m. on Monday, the group of legislators has occupied the building for more than 12 hours, CNA reported.

KMT caucus whip Lin Wei-chou (林為洲) said in an interview with media Monday morning that Democratic Progressive Party (DPP) caucus whip Ker Chien-min (柯建銘) had briefly spoken with the group. However, Lin remarked that the attitude of the DPP has not changed and that it is still reluctant to discuss the issue raised by the KMT.

In a separate interview Monday morning, Ker expressed that he had talked to the opposition party members earlier but thought the group protested in such a radical manner, which may not be "good for them."

The appointment process is a constitutional matter, and it must proceed, Ker said. He added that the manner of the protesters' resistance to the nomination leaves no room for negotiation, and he called on them to carefully consider their actions.

Ker stated that he hoped the KMT will understand that Chen is a very suitable candidate for the top Control Yuan post. He noted that she has dedicated her whole life to the democratic movement and human rights and that she has never left the political arena in 50 years.

Ker also said he hopes that as Taiwan’s democracy flourishes, the KMT will take Chen's history into consideration and stop slandering her.

The media asked Lin whether the KMT would participate in Monday morning’s negotiations. He said there was no reason for such a discussion for the time being, pointing out that the KMT will hold another interim party congress.

In a follow-up question, Lin was then asked whether the KMT group had set a timetable for their protest or if there was a plan to exceed the originally proposed three days and three nights. Lin replied that there is currently no scheduled conclusion for the protest.

Lin said the second provisional meeting will last 20 days, so the group will plan from there. All of the KMT legislators took turns entering the Legislative Yuan to join the protest, save for three who were busy with personal matters.