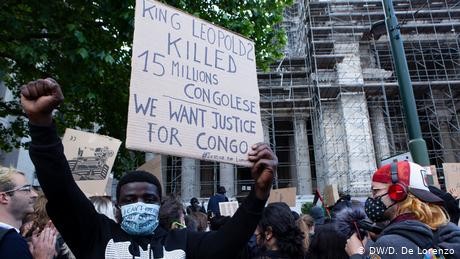 The Congolese diaspora started settling in Belgium after WW II. Between the 1960s up until 1974, most of the migrants were post-baccalaureate students who moved to Brussels. One of their first moves was to rename a neighborhood, referring to it as Matonge, a district in the Congolese capital Kinshasa.

"By seeing what it is happening with the statues of King Leopold II [Sovereign of the Congo Free State from 1885 to 1908 — the ed.], many think that our political conscience has just sparked now, but we have been here for decades," says Mireille-Thseusi Robert, president of the feminist and anti-racism committee, Bamko-Cran.

Read more: Will cities in Belgium take down statues of Leopold II?

The demand for the removal of statues is the tip of the iceberg and part of a broad anti-racism struggle which the Congolese community and other African descendants have been highlighting for the past decades. Difficulties and ethnic profiling that were exacerbated throughout the coronavirus lockdown have made the issue more pressing than ever. "More than ever, people realized that we cannot let what was happening before continue as if it is normality," says Gia Abrassart, founder of the cultural organization Cafe Congo.

"In West Flanders there is a lot of racism, but it's underneath," says Antoine Itoko. "We cannot get the same job opportunities even if we have equal diplomas." He joined the Black Lives Matter demonstration in Brussels on June 7 to commemorate Congolese victims as well one of his friends, Moïse "Lamine" Bangoura, a victim of police violence in 2018.

Fiori Mbeka also took part in the demonstrations. "My parents are concerned because I have a brother and the police tend to target Black males rather than girls like me," says Mbeka, the niece of former Congolese ambassador to Belgium, Joseph Mbeka.

Her experience of racism occurred in school. "I had to take my last year twice. My teacher thought I was not motivated," she says. "Both years we did not cover the chapter on Congo, but left it as the last thing to do in June when there was little time to cover it."

Education Minister Caroline Désir wants to make courses on the history of the DR Congo and colonialism compulsory, however the modification of school curricula can take up to two years.

Meanwhile, the organization Reparons L'Histoire (Let's repair history) has launched a petition to remove all the statues of the Belgian King in Brussels by June 30. The online plea aimed to collect 25,000 signatures, but is now counting over 80,000 signatories.

Some municipalities across Brussels had planned to remove public statues in light of the independence celebrations. In the Leopold neighborhood of the municipality of Ixelles, the statue of General Emile Storms had to be moved from the Square de Meeus to the AfricaMuseum in Tervuren. "The removal was planned in March, but COVID-19 stopped the work," says Karim Sheikh Hassan, the municipal councilor in charge of Public Space in Etterbeek .

Pascal Smet, state secretary for city planning and heritage for the Brussels region, is setting up a working group responsible for deciding on the fate of the statues and other signs of colonialism in public spaces.

"If the conclusion of this debate is that these references have to be removed, I will grant the necessary town planning permits," says Smet.

Read more: What should be done with controversial monuments?

Contextualization is seen as a first step in the process of historical revisionism. However, organizations involved in the process are adamant that the removals should be followed up by a strategy to develop an exhaustive and complete historical narrative that is not biased against certain parts of the population. New street names, they say, should reflect and represent the point of view of the Congolese in the correct narrative of Belgian-Congolese history.

Still, skepticism is prevalent. It took over 13 years of repeated requests by several organizations for the municipality of Ixelles to select a location for the only square in Belgium dedicated to the first prime minister of the independent Democratic Republic of the Congo, Patrice Lumumba. It was finally inaugurated in 2018 to coincide with the 58th anniversary of Congolese independence.

"We do not think it was a victory at all, but just peanuts done for electoral campaigning," says Cafe Congo's Gia Abrassart. She describes the square as a "small and invisible square close to a taxi station," just a few hundred meters from one of the big statues of King Leopold II. "The statue that was supposed to be there has never been finished. The project and the square did not do justice to him or to the deaths of colonialism," she says.

Belgian-Congolese and other pan-African organizations know that they have to keep pushing the debate. "We do not fear this moment will end, we have understood that we need to put continuous pressure on the Belgian government," says Abrassart. "Taking down statues is just the first metaphor for this long process of rewriting the shared history of Belgium and Congo."