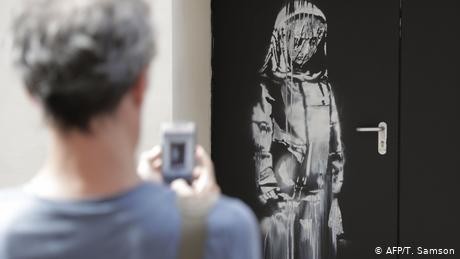 French authorities said on Saturday they had arrested six people in connection with the theft of an artwork by British street artist Banksy.

The stenciled image of a veiled girl with head bowed in mourning was first spotted on an emergency exit door at Paris' Bataclan concert hall in June 2018, and was stolen the following January.

The Bataclan was targeted by "Islamic State" (IS) extremists as part of a coordinated terrorist attack that killed 90 people at the club, and 130 in total during a series of attacks across Paris on November 13, 2015.

When the work was stolen, the Bataclan took to Twitter to announce "profound indignation," calling the piece "a symbol of memory and belonging for everyone — locals, Parisians, citizens of the world."

At a June 11 press conference, Italian authorities announced they had located the stolen mural at a farmhouse in the central Italian region of Abruzzo.

Though it is known that a group of hooded individuals used portable angle grinders to cut the door off its hinges and speed it away from the concert hall in a waiting van, it is not known how the door made its way to the Italian farmhouse, or why.

French authorities say six individuals are currently being held in pre-trial detention after arrests in the southeastern French regions of Isere and Upper Savoy over the past week.

Two of the suspects are being held for the theft, while the other four stand accused of accessory to theft.

The search for the painting has been ongoing across Europe since its disappearance. Speaking with the Italian daily newspaper La Repubblica, Aquila District Prosecutor Michele Renzi said: "The discovery was made possible by investigations conducted by the district prosecutor in collaboration with the police and French investigators."

Banksy, an anonymous art world phenom, has created a number of murals around the globe, many of them in Paris. Though ostensibly a street artist, those works of Banksy's that do make it to auction have regularly sold for millions of dollars.