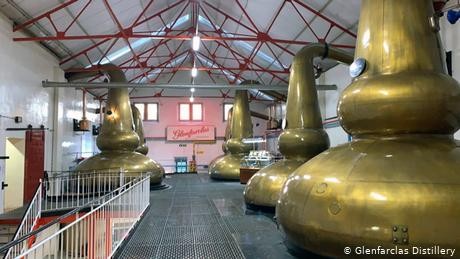 Winters are cold in Scotland, and summer is brief. And at all times, it rains. Right? Not exactly. Like most parts of the planet, Scotland is warming. Average temperatures today are almost 1 degree Celsius (1.8 degrees Fahrenheit) higher than they were a half-century ago. For Scotland's world-famous whisky industry, that's a serious problem.

Worryingly for Glenfarclas, summer 2020 is shaping up to be another scorcher.

"We've had hardly any snow this year. We need snow on the hills from November right through to May time. I think we've had two snowfalls this year and they were about two inches deep at the most, which is nothing," said Fraser.

The whisky industry isn't alone in its climate concern. Across Scotland, booze businesses are getting to grips with green innovation, looking for new ways to make old products.

At Arbikie Distillery in Angus, scientists claim to have developed the world's first "climate positive" gin. By using garden peas instead of wheat, the company has eliminated the need for carbon-intensive fertilizers and can produce animal feed from the leftover material. Taken together, this gives the drink a negative carbon footprint, Arbikie says.

Further north, trees, not peas, are being used to produce an eco-friendly spirit. Distilled by Glenshee Craft in the Scottish Highlands, "Pinewood Gin" is flavored with juniper berries, pine needles, birch leaves, bog myrtle, and wood sorrel — all derived from threatened local forests. Sales of the drink will go towards woodland restoration schemes, producers say, making it a sustainable enterprise.

For its part, Scotland's whisky community is reporting strong environmental advances. New statistics from the Scotch Whisky Association (SWA) indicate a 22% improvement in water efficiency, a one-third drop in greenhouse gas emissions, and marked fall in landfill use.

"It's great to see the progress we are making, including significant reductions in fossil fuel use and in recycling and reusing waste. This work is going on hand-in-hand with our supply chain too, and together we are leading the way to a sustainable future for our sector," said Karen Betts, Chief Executive of the SWA.

But it's not all good news. The industry's efforts to reduce packaging weight have fallen flat, with a 2.6% increase since 2012. And there are worries about whisky makers' continued use of one particular finite resource: peat.

A fossil fuel found across Northern Europe, peat smoke is used to instill the spirit's pungent, "love it or hate it" profile. While this process requires only a small amount of the combustible substance, significant volumes of carbon dioxide are created.

Peatlands also play a crucial role in carbon capture, absorbing and storing millions of tonnes of atmospheric CO2. Though less than 1% of Britain's annual peat use is accounted for by the whisky industry, the extraction process has wider consequences for this "carbon sink" phenomenon, experts say.

"When you take the vegetation off the top, which you have to do to extract the peat underneath, you automatically remove the potential for any further carbon sequestration," said Sarah Proctor of the International Union for Conservation of Nature (IUCN)'s UK Peatland Program.

Similarly, when waterlogged peat bogs are drained for harvesting, the surface dries and carbon begins leaching "back into the atmosphere," Proctor added.

This isn't a concern for Glenfarclas, which doesn't use peat in its malting process. Environmentalism is nonetheless important to the distillery, says production manager Callum Fraser.

"We actually recycle some of our heat, to heat a boiler and heat water, using the heat coming from the chimneys to create hot water for our evaporator plant. We're pretty switched on," he said.

This climate consciousness is driven in part by a sense of self-preservation. If global temperatures continue to rise and rainfall lessens, Glenfarclas's water supply will grow ever more precarious.

For the distillery, that's a serious issue. Filtering through granite as they flow downhill, the streams of Ben Rinnes — the area's highest mountain — impart both "flavor and character" to the whisky, explains Fraser. Were they to regularly run dry, Glenfarclas's whole operation would be impacted.

"We wouldn't find another source, we would just cut back on what we're doing and use what we've got. We would not risk the quality of our product for anything."