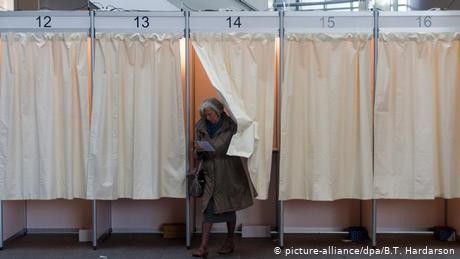 Icelanders are casting their ballots in a presidential election on Saturday, with incumbent Gudni Johannesson widely expected to win a second four-year term.

Iceland is only the second nation in Europe to hold polls since the outbreak of the coronavirus pandemic, after Serbia held elections last week. The country, which is home to about 365,000 people, has not been severely affected by the health crisis. It has so far reported 10 deaths, and currently has around 10 active cases.

But the pandemic has hit the tourism-dependent economy hard, prompting the central bank to cut its main rate twice and the government to spend around $2 billion (€1.78 billion) in financial aid to stricken businesses and individuals left jobless.

To reduce the risk of infection, voters have been asked to stay two meters apart at polling stations and are being provided with hand sanitizers and gloves.

Johannesson, a 52-year-old independent and former history professor, was elected to a first four-year term in 2016.

"He has been seen as a man of the people, not pompous, not very formal. So Icelanders seem to like him and want to keep him as president," Olafur Hardarson, a political science professor at the University of Iceland, told AFP.

Jonsson, on the other hand, has struggled to make inroads with voters.

The 56-year-old, who has run a hotel in Denmark since 2013 and is a fan of US President Donald Trump, first entered politics in 2010 when he founded the right-wing populist movement Haegri graenir, which he led for three years.

As in recent elections, the role of the president has been the main theme of the campaign. In Iceland's parliamentary republic, the president's position is largely symbolic, but he or she does have the power to appoint ministers and veto legislation.

Most powers lie with the government, currently headed by Prime Minister Katrin Jakobsdottir.

Challenger Jonsson wants the president to play a more active role in politics, by exercising his right to veto legislation.

That power has only been used three times, each time by Olafur Grimsson during his five mandates from 1996 to 2016.