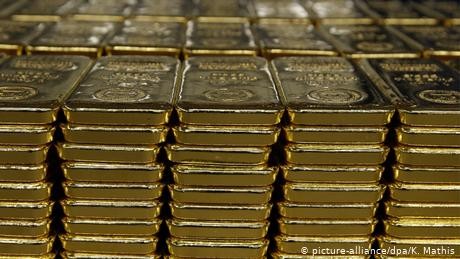 French authorities on Friday said they had busted a huge operation that allegedly collected stolen gold and sold it across the border in Germany.

Police seized 29 kilograms of the precious metal worth almost €1.5 million ($1.7 million) in a series of searches in three regions, prosecutors in the eastern city of Nancy said.

The stolen gold, received from thieves, had been melted down into ingots in France, which other members of the network then sold to the firm in Germany.

One of the 14 suspects arrested, a French citizen traced to Belgium, had been handed over by Belgian authorities to France on the basis of a European arrest warrant.

In all, 11 suspects remained in custody. Three were free on remand.

The trafficking network, which operated in numerous French Department (regions) were arrested over the past two months, prosecutors said.

The probe has now shifted to bookkeeping vouchers seized during searches in Belgium and Germany. Prosecutors put the illegal deliveries at "a couple dozen million euros."

The jeweler was caught on a train at the border between France and Germany in possession of €37,000 in cash, Europol said at the time.