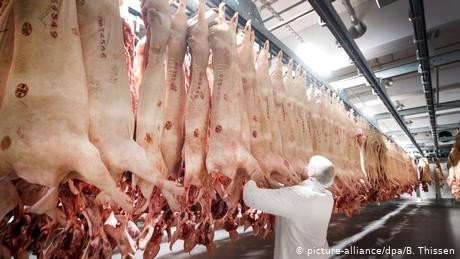 Tönnies, one of Germany's largest meat processing companies, has been taking flak since news broke that a large number of its laborers had contracted the coronavirus. So far, over 1,500 individuals have tested positive for COVID-19. The outbreak was possible because many of the foreign laborers working for the company are put up in crammed living quarters. To make matters worse, Tönnies has not ensured social distancing is enforced at the workplace.

Outbreaks like these, however, are not confined to German meat processing plants. In a recent report, the European Federation of Trade Unions in the Food, Agriculture and Tourism sectors (EFFAT) warned that "appalling working, employment and housing conditions" affect "thousands of meat workers in many countries across Europe."

Virus outbreaks in other EU states

Many meat processing companies in EU member states like Belgium, France, Ireland, Spain, Poland and the Netherlands have seen coronavirus outbreaks at their plants since April 2020.

Ireland's meat industry was the second-worst hit after Germany. A total of 950 laborers contracted COVID-19 at 19 plants. At some sites, one-fourth of the entire workforce fell ill. Yet despite such outbreaks, none of the Irish plants were shut down.

When a coronavirus outbreak hit a Dutch abattoir in Groenlo, near the German border, it left 20% of the workforce infected, leading food manufacturer Vion to shut down the site in May. Workers were only tested, however, after German authorities called for this, as most laborers were living in Germany and commuting across the border to their workplace.

Two French slaughterhouses reported virus outbreaks in mid-May. So far, 180 laborers have tested positive for the pathogen. Only one site located in Val de Loire was shut by local French authorities after 10% of the workforce fell ill.

At a plant in Binéfar, Spain, operated by Litera Meat, some 200 infections were reported.

"Germany has seen the single largest outbreak in one meat processing plant," according to EFFAT secretary general Kristjan Bragason. He says the explanation for this is that "we have seen veritable social dumping" in recent years. Germany is Europe's biggest meat producer.

Many laborers in the European meat industry are employed by subcontractors and hail from eastern Europe, Africa, and South America. EFFAT estimates that 80% of Germany's meat production is carried out by migrant workers from eastern Europe.

Germany abattoirs hire subcontractors to supply laborers to slaughter and process a specific number of animals. On paper, the company operating the slaughterhouse therefore carries no responsibility for the number of laborers at its site, what they are paid and how the work is organized.

Due to this legal loophole, laborers find themselves in a precarious economic situation and put up with endless hours of piecework with few breaks. Moreover, they are often crammed into dormitories that do not meet basic hygiene standards.

Migrant workers pay up to €200 ($225) to rent a bed in dorm shared with many others. "Social distancing measures put in place at the workplace are pointless if laborers get infected in such dorms," says Kristjan Bragason. Some of them, he adds, are so scared to lose their jobs they even show up to work sick.

EFFAT says the virus can only be contained if checks on migrant workers' living conditions are implemented. In Denmark, where no outbreaks have been reported in slaughterhouses, three quarters of laborers are Danes. Spain, too, has cut back on the number of migrant workers in its meat industry.

Following his election in 2017, French President Emmanuel Macron announced he would take action against the practice of hiring meat workers through subcontractors. He said anyone working for a year or more should be given a proper contract from the French parent company. So far, however, no legislation to this effect has been passed.

Germany has said it now wants to draft and pass a similar law before January 2021. German Labor Minister Hubertus Heil of the center-left Social Democrats (SPD) wants to outlaw the practice of outsourcing labor in the German meat industry.

Read more: Opinion: Putting the foxes at Tönnies in charge of the hen house?

Global meat industry in the spotlight

"The only country in a similar situation to Germany," Bragason says, "is the US." There, slaughterhouses have reported a similar spike in infections.

Several US plants had to halt production after some 5,000 workers tested positive for the virus. Many sites re-opened in May, however, after US President Donald Trump issued a decree declaring the meat industry an essential sector. His step came after US supermarkets faced meat shortages.

During a virtual town hall with meat workers, Democratic presidential candidate Joe Biden recently compared US meat processing plants to a "war zone." US abattoirs are usually staffed by foreign laborers from Latin America, who have to endure dire working conditions.

Most meat producers across the globe pay their laborers very low wages and force them to endure an insecure, precarious existences in order to keep production costs and sales prices down. Media reports from Great Britain, Canada, Brazil and Austria show that here, too, COVID-19 outbreaks abound.