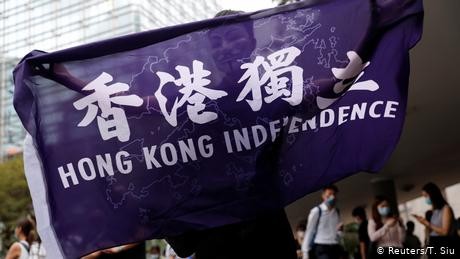 The administration of US President Donald Trump said on Friday that it was restricting visas for unspecified current and former officials of the Chinese Communist Party who were believed to be infringing on the autonomy of Hong Kong.

The move comes as China moves forward with a security law that would punish perceived subversion in Hong Kong, which Beijing had promised a high degree of autonomy when it regained control of the major financial hub from Britain in 1997. Critics say the law will effectively remove the freedoms that Hong Kong has enjoyed up to now.

Read more: Will China's new national security law for Hong Kong be the end of autonomy in the territory?

"The United States calls on China to honor its commitments and obligations in the Sino-British Joint Declaration," said Secretary of State Mike Pompeo while announcing the visa restrictions.

A State Department spokeswoman gave few details on precisely who was targeted, saying only that those subject to the restrictions would "be evaluated for their eligibility under this policy when they apply and may be refused visas."

The announcement of the visa policy came a day after the US Senate passed a bill, the Hong Kong Autonomy Act, that would place economic sanctions in the US on Chinese officials and Hong Kong police identified as working to damage Hong Kong's autonomous status. The bill, which needs to be passed by the House of Representatives and signed into law by Trump, would also punish banks that do business on a large scale with such individuals.

Last month, Pompeo and Trump announced that the US would strip Hong Kong of the special trading privileges that have allowed it to remain a global financial hub. Pompeo said in May that Hong Kong had already lost most of its autonomy from China and did not warrant any special status.

Tensions have been rising between Washington and Beijing not only over Hong Kong, but also over the coronavirus pandemic, trade issues and what many see as Chinese expansionism in the South China Sea.

However, despite the growing rows, Trump is still says he is hopeful that China will implement a bilateral trade deal.