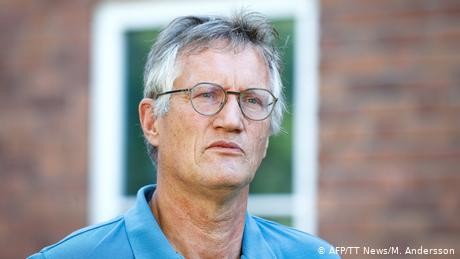 A top Swedish official lashed out at the World Health Organization (WHO) on Friday in response to a coronavirus risk warning issued by the organization.

"Unfortunately it is a misinterpretation of the data," said Anders Tegnell, the epidemiologist with the Swedish Public Health Agency told Radio Sweden.

"We find a rising number of cases in Sweden because we test a lot more than before." The WHO made a "total mistake," he added.

Tegnell also noted a decline in intensive care cases and hospital admissions in Sweden. He said the WHO has been in touch to get a more "nuanced picture" of virus transmission rates in the country.

The WHO warning was issued on Thursday by Hans Kluge, head of the body's European regional office.

Kluge said that 11 countries within the Europe region, which includes parts of central Asia, including Armenia, Albania, Ukraine and Sweden had "accelerated transmission that if left unchecked will push health systems to the brink once again."

Tegnell says the claim that Sweden was experiencing a "very significant resurgence" was incorrect and that the country was being incorrectly categorized alongside countries that are experiencing their first serious wave of infections.

The epidemiologist has been a key figure in Sweden's virus response since the first cases were recorded in the country.

The country's death rate stands at over 5,000 — one of the highest in the world, in terms of size of population.

Numbers have declined in recent weeks with around 10 patients a day being admitted to intensive care units, while Sweden has more than doubled its COVID-19 testing rates in the past month.