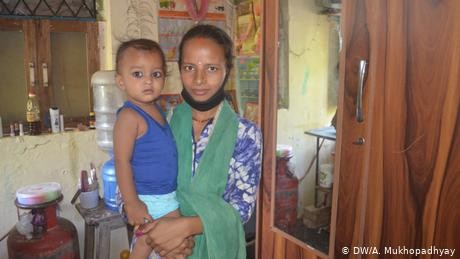 "Ma'am, we are poor, who cares about us?" Priyanka Kumari (main picture) tells me as I enter her house, a cramped single room in an urban slum in the city of Gurugram. I look around her home. It has an oven in the corner, a cupboard and several pictures of Hindu gods.

It's mid-May, almost two months after a nationwide lockdown began, and Priyanka is fidgety. She wants the "coronavirus" to end soon. When I ask her if she knows what the coronavirus is, she replies, "I have no clue. I just wear a mask because everyone wears one."

Priyanka is a 19-year-old woman from the Saran district of Bihar. Married off at 17, she had her child a year later owing to pressure from her in-laws. She moved to Gurugram in January to join her husband, in the hope of a good life.

"I want to get out of this slum," she tells me, while cradling her year-old son, Aryan. "If this pandemic hadn't happened, we would have moved into a bigger house. I don't want to live here as there is too much kachra (garbage)."

She has a spotlessly clean house. Her obsession with cleanliness has increased after the pandemic began. "I ask people to sanitize their hands before entering my house. I don't even let my child play with other children as I am worried about his health," she adds.

I ask her if she knows the symptoms of the coronavirus. "I know that it came from China and from a person who ate a bat. I used to get information when the pandemic began from my TV, but we had to disconnect the connection last month as we didn't have money. I don't have a smartphone so I can't get news on my phone. I depend on my husband for news."

India imposed a nationwide lockdown in March 2020, leaving millions of migrant workers in the lurch. According to a report by the World Bank, India's lockdown affected the livelihood of about 40 million internal migrants.

The lockdown has exacerbated anxieties and tensions among migrant workers, says Maya John, labor historian and member of the Gharelu Kamghar Union, a union of domestic helps. "The lockdown has reduced migrant women from the service class to beggars. They were always proud to belong to a community which earned money through hard work. But now, they have no place to go to. Anxieties from the lockdown is making people in slums fight for basic rights like water."

While the Indian government claimed to have set up shelter camps and provided free ration and cash, the reality on the ground is starkly different.

Priyanka has been struggling to feed herself and her family since the lockdown began. She got turned away from her local ration store as she has a ration card from Bihar. She tells me that the community center responsible for distributing cooked food is closed since April.

I speak to a few women in the slum to corroborate Priyanka's view. Kailash and Rita, two migrant workers from Bihar and Odisha, take me to the local community center, which is empty, except for a few well-off people who now walk their dogs there.

A local police officer responsible for distributing ration tells me that the community center stopped providing food after people from the same family started taking advantage of the free service. "The poor people are like this only, ma'am." He tells me that the state government of Haryana stopped its free ration service for the poor on June 1 as authorities believed most migrant workers affected by the lockdown had resumed work and wouldn't need "free food" anymore.

I make my way back to Priyanka's apartment after my conversation with the police officer. I see a local government officer distributing ration and tell him about Priyanka's plight and the police's indifference. The officer-cum-social worker asks me to call on a local helpline number to get Priyanka registered to receive ration. I go to Priyanka's house and call on that number to get her registered. The man on the line, assuming that I am Priyanka, retorts: "Go, get your food in Bihar, there's nothing for you here."

Priyanka doesn't look baffled at all. "These people always do this." A week later, Priyanka breaks down. She tells me that she's scared of being reduced to begging for food because of this pandemic. Her every effort to have secured ration has been futile.

"I go without food on many days as I just don't feel like eating nowadays. I want corona to go away," she says. She complains to me about frequent stomachache and requests me to take her to a doctor.

Read more: India: Being blind during the coronavirus pandemic

In early June, I take Priyanka to a local NGO distributing medicines to the poor. There, she asks for medicines for gastric problems. She tells me she was quite "healthy" before she had her son. "After my son was born, I just lost so much weight and didn't gain it back," she sighs.

I ask Priyanka if she intentionally decides to not eat. This time, she admits to something else. "I am not eating because we have limited food. I don't want my husband and child to go hungry."

He is yet to receive his salary for May or June. Kamlesh, unlike his wife, is optimistic about the economic situation. "Things are opening up and it's all going to be fine soon," he tells me. Priyanka chips in, hesitatingly, "But we will go back to our village if the lockdown continues."

Kamlesh took loans from his family to buy food during the worst phase of the pandemic. When asked about his landlord's behavior during this difficult time, Kamlesh praises him. "He didn't bother us to pay the rent at all, he was quite flexible with the payment."

Priyanka listens quietly to our conversation, occasionally going out of the room to give us privacy. I request Kamlesh to let me take Priyanka out for a walk.

Your husband seems like a nice guy, I tell her. "Yes, he is better than the rest, but he still took dowry when we got married," Priyanka says in a low voice. "His family asked for a car, but in the end they decided to take money, so that we both could settle down in the big city. I am still waiting to see us settle down, though."

She goes on. "You know, our landlord forced us to give all money we had to pay the rent," she tells me. "Kamlesh didn't tell you the truth. The landlord took whatever little we could give him. He told us to give him 100, 200, 1,000 rupees, anything we had. And he made sure to take it."

She complains to me about a local yoga teacher who employed Kamlesh but never paid his dues. "He has money, ma'am, but he isn't paying us. Kamlesh can't afford to be exploited at this difficult time, so he stopped working with the yoga sir."

Kamlesh also worked as a cook at a house where three unmarried men lived, but after they left for their homes, Kamlesh is left with just one job, at the furniture outlet.

The next day, I am a bit late in reaching Priyanka's house. She usually asks me to visit her at around 12 in the afternoon, but today, I reach at 3 p.m. She pretends to not recognize me initially, then locks the house the moment I enter.

She turns off the light and fan and asks me to keep quiet and hide under a corner. I see a bulky man peeping into the flat from the window, then walking up to the door and banging loudly. "Don't you guys have a fan? Turn it on, I know you're in there. If you don't open up, I will cut off your electricity!" he bellows. Priyanka is cowering in the corner, clasping her son's mouth shut.

After the man leaves, I ask her who he was. She tells me it was the landlord. I ask her why she was hiding and she evades the question. I try to leave but she stops me. "Stay a little longer. If he sees you, he will think I am ratting him out to a journalist."

Priyanka Kumari is one of many young women who came to India's cities in the hope of a good life. Priyanka's aspirations are simple and according to her, achievable. She wants a good home, an education for her son, and smart family planning so that they don't have more children than they can afford.

Priyanka had her entire life planned out before the pandemic struck. She even planned on doing some course to get a desk job once her son grew up.

The pandemic has pushed Priyanka to the brink, forcing her to rethink her aspirations and question her dreams. She is now more cognizant of the fact that she got married early and didn't complete her education.

"I didn't complete my education in the village as you know the condition of village schools. Education isn't encouraged there. My parents married me off early as they were concerned about the safety of their young unmarried daughter. I want my son to be educated. I don't want to go back to the village so that my son stays uneducated too," she says.

This work was supported by the National Geographic Society's Emergency Fund for Journalists.