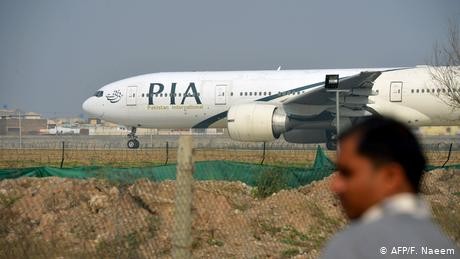 More than one-third of pilots working for Pakistan's flagship carrier PIA could lose their job in a massive cheating scandal. According to the government, pilots both in and outside the airline had other people take their exams in order to keep their flying licenses.

About 150 of PIA's 434 pilots were carrying "either bogus or suspicious licenses." PIA spokesman Hafeez Khan told the AFP news agency on Thursday.

"We have decided to ground those 150 pilots with bogus licenses with immediate effect," he said.

Investigators will also look into possible bribing of officials of the country's Civil Aviation Authority (CAA) in order to maintain the scheme.

The government first broke the news of the scandal on Wednesday, when Pakistan's aviation minister Ghulam Sarwar Khan presented the results of a probe into a deadly crash in Karachi last month. However, sources quoted by the AP news agency said that PIA knew about the issue since at least two years ago and had fired at least four pilots before over the matter.

On Wednesday, Khan said that a total of 236 Pakistani pilots had "fake" licenses.

The Karachi crash saw PIA pilots fly an Airbus A320 into a residential neighborhood near the airport. The incident killed 97 people on board the plane and one person on the ground, with two passengers managing to survive.

Khan said the pilots were not focusing on the landing and were instead talking about the coronavirus pandemic and their infected family members. The pilots' first attempt at landing failed after they ignored the warning from the air traffic control that the aircraft was too high. At the next attempt, which ended in the crash, pilot controlling the landing refused to heed warnings that they were too low, insisting that he would manage it.

The investigators also found that the air control failed to tell the pilots that the plane sustained damage to their first attempt.

"The engines of the plane were damaged when they scraped the runway but the air traffic control did not inform the pilot," Khan said.

Following the news from Pakistan, the International Air Transport Association (IATA) said that they were seeking more information.

"We are following reports form Pakistan regarding fake pilot licenses, which are concerning and represent a serious lapse in the licensing and safety oversight," a spokesman said.