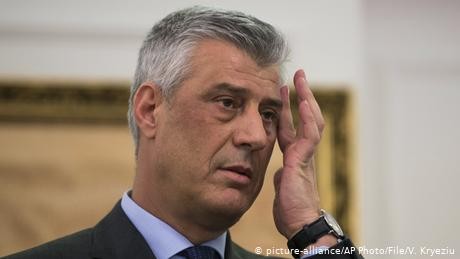 The news was a bombshell for Kosovo: President Hashim Thaci faces a war crimes indictment.

And he's not the only one. Former parliamentary speaker Kadri Veseli and eight other senior commanders of the Kosovo Liberation Army (KLA) stand accused of "nearly 100 murders." The now-defunct Albanian guerrilla group fought Serbian forces for Kosovo independence in the late 1990s.

Prosecutors with the Hague-Based Kosovo Specialist Chambers also claim the men were involved in torture, persecution, and enforced disappearance. In addition to Serbs, the accused allegedly also targeted Roma people and even other Kosovo Albanians, including their political opponents.

Officials across Kosovo responded to the indictment with shock and dismay. For its timing, more than anything.

The Special Prosecutors Office (SPO) filed the charges on April 24. A pre-trial judge has until October to decide if they are valid. And yet, the prosecutors decided to go public on Wednesday, just as Thaci was heading to Washington DC.

US Special Presidential Envoy for Kosovo and Serbia Richard Grenell had invited the leaders of Kosovo and Serbia to meet in the White House on Saturday, with all sides hoping for a breakthrough in long-stalled normalization talks.

"The president of the Republic of Kosovo, Hashim Thaci, stopped his trip to the US," Thaci's Pristina office confirmed on Wednesday. Sources told DW that Thaci is set to return to Kosovo on Thursday after spending the night in Vienna.

The Special Prosecutor's Office with the EU-backed court said they had "deemed it necessary" to go public on Wednesday because of "repeated efforts by Hashim Thaci and Kadri Veseli to obstruct and undermine the work" of the court.

The two suspects "are believed to have carried out a secret campaign to overturn the law creating the Court and otherwise obstruct the work of the Court in an attempt to ensure that they do not face justice," officials said.

Western officials lobbied heavily to set up the Kosovo Specialist Chambers in 2015, fearing that Kosovo-based prosecutors and judges would not be able to withstand pressure from local politicians. The Chamber is ruled by Kosovo law, but funded by the EU and staffed by international judges and prosecutors.

No Thaci, no Hoti

US Envoy Grenell put on a brave face, saying that the talks would proceed and that Kosovo's Prime Minister Avdullah Hoti would be speaking for Pristina in Washington. Commenting on Thaci, Grenell said he respected the president's decision to stay away "until the legal issues of those allegations are settled."

Several hours later, however, Hoti also announced he would not be atteding the talks. The prime minister's political clout isn't big enough for talks of this magnitude — while Thaci has been building his reputation and his power base since his wartime days, Hoti only took power last month.

After the news of the indictment hit the media, former parliamentary speaker Kadri Veseli dismissed it as a push to "rewrite the history of Kosovo."

"Serbia has committed crimes in Kosovo," said Veseli. As one of the accused, he is ready and "privileged" to once again "defend Kosovo."

"The KLA liberation war was holy, it was a war for the freedom and independence of Kosovo," he said.

Both Thaci and Veseli have already stated they are ready to go to The Hague and defend this "holy war."

Crimes not 'processed nor atoned'

Serbian President Aleksandar Vucic was also set to attend the Washington talks before his Kosovo counterparts dropped out. Vucic had already visited Moscow and discussed the Kosovo issue with Russia's Vladimir Putin earlier this week.

Vucic has so far refrained from commenting on the indictment against Thaci — a somewhat surprising stance from the former ultra-nationalist. Serbian media described the charges as "dramatic" and "completely unexpected."

The EU was also reluctant to comment, with spokesman Peter Stano saying the bloc was "supporting" the work of the court and its prosecutors.

"Too many war crimes have neither been processed nor atoned for over 20 years after the war," the Green party deputy told DW. "I hope that this would make a dent in the sentiment felt by many people, who believe that many war criminals on all sides still enjoy impunity."