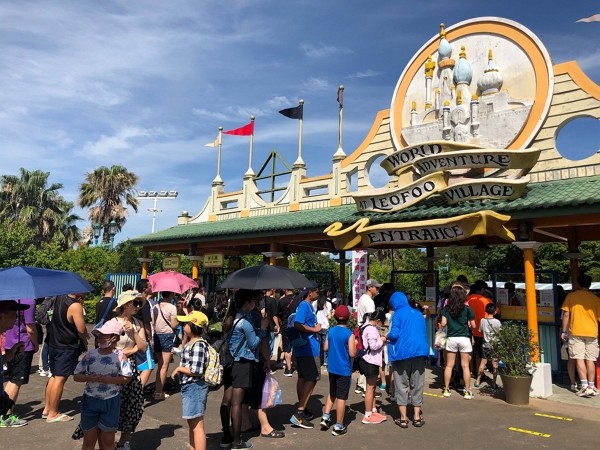 Large crowds were seen at tourist spots across Taiwan at the beginning of the four-day Dragon Boat Festival holiday Thursday, following the reduction of COVID-19 pandemic restrictions in Taiwan.

About 100,000 people will visit Kenting scenic area over the first three days of the holiday, the police said, adding that traffic controls will be introduced on Kenting's main street during night hours to keep cars and pedestrians apart.

In Taitung, eastern Taiwan, about 5,000 tourists went to Green Island and about 1,000 to Orchid Island.

The north coast was also favored by many tourists, with areas like Jinshan Old Street and Guihou Fishing Harbor reporting crowds three times higher than on a normal weekday.

According to New Taipei City's Tourism and Travel Department, 80 percent of hotel rooms in the north coast area are occupied.

Wang Ching-yi (汪靜怡), an executive at Yangmingshan Tien Lai Resort & Spa, said reservations for the Dragon Boat Festival holiday came in as early as early June, and the hotel is fully booked for the holiday.

Meanwhile, traffic spikes were reported on many sections of the nation's freeways as people chose domestic travel instead of overseas tours due to the COVID-19 threat.

The Freeway Bureau said the Xueshan Tunnel on Freeway No. 5 connecting Taipei and Yilan saw more than 30 hours of congestion since the previous evening, when traffic was reportedly moving at less than 40 kilometers per hour.

As of 6 p.m., freeway traffic was recorded at 97.8 million vehicle-kilometers, compared with 87 million v-km on a regular weekday, the bureau said.
Total traffic volume for Thursday is estimated to be up to 125 million v-km, a measure of traffic flow, calculated by multiplying the number of vehicles on a traffic network by the average length of trips measured in kilometers, it said.

Traffic volume of about 118 million v-km is expected on Friday, the bureau said.