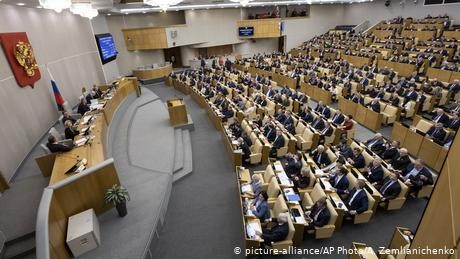 Russia, in the clutches of a coronavirus pandemic that is infecting as many as 8,000 new patients each day, is holding a vote on changes to its constitution. This Thursday will kick off one week in which Russian citizens will be asked to cast their votes on far-reaching changes to the document.

It would be a massive surprise if the changes were not approved. Despite sinking popularity, Russian President Vladimir Putin still has a firm hold over a large and stable base of supporters.

No term limits for Putin

According to the law as it stands today, Putin would have to step down in 2024, after the completion of his second six-year term. Yet, he has no intention of doing any such thing.

Putin is attempting to impose constitutional changes that would create an exception to existing rules and allow him to run for another two terms as president. Even though he has said he is not sure if he will even run, the change would open the door for him to remain in power until 2036, at which point he would be 83 years old.

All other candidates, however, would be limited to serving only two terms in total. Previously the constitution stated only that a candidate could not serve more than two terms consecutively.

Russia is already home to a presidential system that gives the head of state far-reaching powers. But the proposed changes would grant even greater scope. New changes propose that the president may "direct the general work of the government." The government itself would no longer have any say about what direction the country is heading. Its only function would be to "organize work" on the president's initiative.

Should the changes be approved, the president would maintain the power to appoint a prime minister. Up until now, that nominee needed the consent of Russia's parliament. A new rule introduces an important change: If the Duma — the lower house — rejects the president's candidate three times, he is still allowed to appoint his chosen candidate. And he can do so without having to call for new parliamentary elections as has been the case until now.

Another related change also makes it easier for the president to replace prime ministers — and allow the executive to replace them without having to dissolve the Cabinet. In the future, individual Cabinet members will also answer directly to the president.

Furthermore, the president will have the power to fire justices from both the Constitutional and Supreme Courts. To do so the president would need the approval of Russia's upper house of parliament, the Federal Council, but that is considered a formality, as the president also has the power to appoint members to the body — seven of them for a lifetime appointment.

The Kremlin boss himself would also be guaranteed a lifetime appointment in the Council, which would in turn guarantee him immunity after stepping down as president.

What's in it for voters?

The official referendum website makes no mention whatsoever of Putin's electoral exception. Instead, the site prefers to laud the wealth that constitutional changes will supposedly bring the Russian people. The state-run Rossiyskaya Gazeta newspaper, for instance, wrote of "welfare rights" like better worker protections and affordable healthcare.

"Maternity assets," worth about €6,000 ($6,767) per newborn child, are also tied to the referendum. Previously, such premiums were only paid from the second child onward. Another amendment on the referendum prohibits minimum wage falling below the poverty line, which would mean a monthly wage of roughly €135 ($152).

The authors of the referendum attempt to score points with conservative and right-wing nationalist voters by emphasizing "family values." These values dictate that marriage is solely a union between a man and a woman, children are to be made the government's top priority, and the country's youth given a "patriotic" upbringing. The Russian language, too, will be permanently anchored in the constitution as the "language of the nation's people."

Will Russia's relations with the West change as a result?

The revised constitution is also intended to protect Russia from "damaging" decisions handed down by international courts. In the future, international law will not be given priority in Russia — and not even applied in instances where the Russian Constitutional Court declares it to be in conflict with Russian law.

So what does that mean in concrete terms? Moscow could, for instance, be confronted with the fact that the Russian military shot down Malaysian Airlines flight MH17 over eastern Ukraine in 2014 — killing all 298 people onboard. Most of those killed were from the Netherlands. Currently, four individuals — three of them Russian — are on trial before a district court in The Hague, Netherlands, over the incident.

A civil lawsuit against Russia is also on the docket at the European Court of Human Rights (ECHR). With a changed constitution Russia would no longer acknowledge the legal authority of the ECHR or any of its verdicts. Russian citizens, however, would maintain their right to file suit with the court.