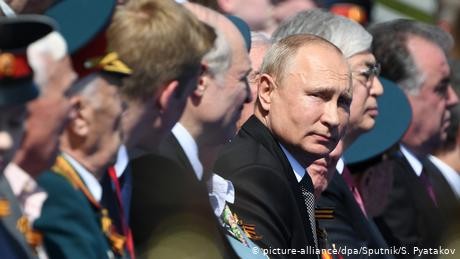 It is Monday, June 22 — the anniversary of Nazi Germany's invasion of the Soviet Union — when Julia Obertreis receives an email from the Russian Embassy in Berlin. Subject: "Article by Vladimir Putin." When Obertreis, a professor of east European history at Germany's University of Erlangen-Nuremberg, opened the email she found a short letter and an article, previously published in Russian and English, that President Putin had written on the World War II.

The article was published to coincide with the 75th anniversary of the end of the war in Europe, more specifically May 9th, as it is traditionally celebrated in Russia. Moscow's accompanying Victory Day military parade, however, was postponed until June 24 this year due to the coronavirus pandemic.

In his article, Putin deals with events that led to the outbreak of war, sharply denouncing the Munich Agreement and the policies of the West at the time. His justification of the non-aggression pact between Hitler and Stalin has been met with criticism in Poland and the Baltic states.

But there was something about a note at the end of the email that Obertreis found even more irritating than everything else. The note informed the recipient that they should "use the Vladimir Putin article for future writings on history" as there was sure to be "great interest" in the article among academics. Other German historians received the same message, and DW has obtained a copy.

Obertreis vented her anger over the email on Twitter, where she also posted a screenshot of it. "First, as an academic and a historian specialized on eastern Europe, I don't want any unsolicited reading tips from diplomatic posts," Obertreis told DW. She says the collegial World War II research Putin calls for in the article "works best when politicians and diplomats exert as little influence as possible. There is no way to stop ruling governments from playing politics with history. But this attempt at influence by the Russian embassy is unacceptable in terms of scientific freedom."

Another eastern Europe specialist, Professor Anke Hilbrenner of the University of Göttingen, agrees: "I was surprised when I got the mail. At first, I thought it was a joke," as she told DW. Hilbrenner is confident historians would have looked closely at the article without the embassy's crude insistence. She says it is "highly unusual" for a president to present him or herself as a historian, but she also sees a serious problem in "mixing politics and academia." She, too, found the embassy's suggestion to use the text especially bewildering: "That is clearly an attempt to influence academic freedom."

Martin Aust from the University of Bonn is also a historian focussed on eastern Europe, and he agrees with his colleagues: "I find it very strange and irritating that an embassy would send a text written by their country's president to an academic mailing list in the host country, and then go so far as to suggest the text may be helpful in the writing of future history books. Academic freedom also means freedom from receiving reading tips from heads of states or diplomats who stand accused of trying to exert influence."

Responding to DW, the Russian embassy claimed Putin's article had already "caused big waves in German media and among politicians and society at large." The embassy continued, "In this context, the embassy thought it appropriate to provide the entire article for those in society and academia who may be interested in this subject."

When it comes to assessing the content of Putin's World War II article there is broad agreement. Julia Obertreis is crystal clear: "Putin's claim that Polish leadership alone was responsible for the country's fate is totally unsubstantiated and must be clearly rejected as a theory." Aust and Hilbrenner agree.

However, the academics also see a 2019 European Parliament decision to label both Nazism and Stalinism as equally responsible for the start of the war "problematic," and "confusing." Putin vehemently criticizes Brussels' decision in his article.

In the end, Putin's article will probably get a lot of press coverage, just not of the kind that was planned. And how will historians use it? "As source material for Putin's exploitation of history and for his clumsy and shameless attempt to force historians into his service,” says Hilbrenner.