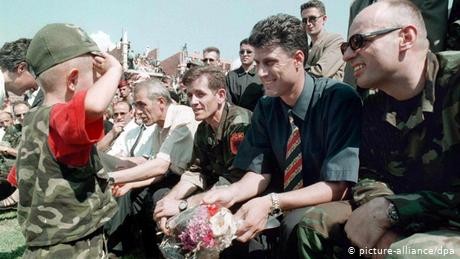 Kosovo president Hashim Thaci and nine other former militants were indicted for war crimes by the Office of the Special Prosecutor in the Hague on Wednesday.

They are "responsible for nearly 100 murders," according to the prosecutors at the EU-backed Kosovo Specialist Chamber. The victims included Kosovar Albanians, Serb and Roma people, with political opponents also targeted, according to the officials.

The officials described the indictment as "the result of a lengthy investigation" adding that the effort reflected the SPO's "determination that it can prove all of the charges beyond a reasonable doubt."

The 52-year-old Thaci, like many other present-day Kosovo politicians, played a prominent role in the resistance movement that pitted ethnic Albanians against Serbs in what was then a Serbian province.

Less than a year ago, Kosovo's Prime Minister Ramush Haradinaj resigned after he was summoned by the same court on suspicion of war crimes.

The ethnically-charged conflict culminated with NATO intervening to support the separatist movement and launching a 78-day bombing campaign against Serbian targets in Kosovo and across Serbia.

In the following years, Kosovo war crimes were prosecuted before the now-defunct International Criminal Tribunal for the Former Yugoslavia (ICTY) in The Hague. The court has now been replaced by the Kosovo Specialist Chamber, an EU-backed body set up in 2015 and also based in The Hague. The Chamber is ruled by Kosovo law, but funded by the EU and staffed by international judges and prosecutors.

The prosecutors said the charges were laid in April before being publicly unveiled on Wednesday. The announcement comes just days before top Serbian and Kosovo officials are meeting in Washington on Saturday for a long-awaited round of dialogue. Thaci was also set to attend the Washington summit.

Many Balkan and international observers view the Washington summit as the key step in the ultimate resolution of the conflict. Serbia still does not recognize Kosovo independence.

Thaci's 'secret campaign' against the court

Despite operating for years and summoning hundreds of witnesses, this is the first indictment ever issued by the Chamber's prosecutor. The office also accused Thaci and another suspect, former parliamentary speaker Kadri Veseli, of trying to "obstruct and undermine" the tribunal's work.

"Thaci and Veseli are believed to have carried out a secret campaign to overturn the law creating the Court and otherwise obstruct the work of the Court in an attempt to ensure that they do not face justice,'' the statement said.