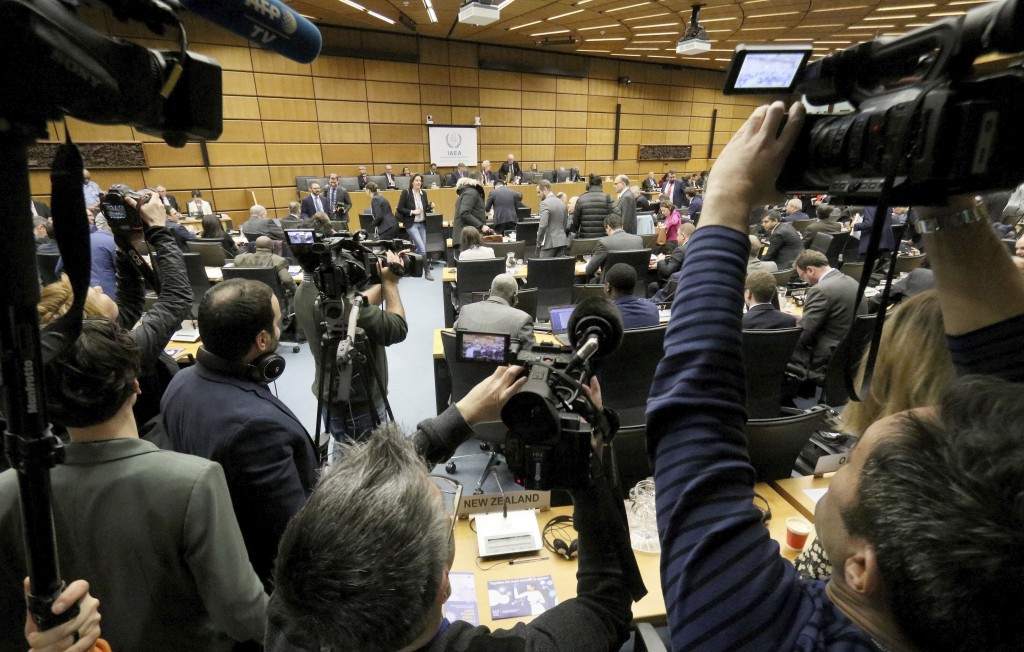 TEHRAN, Iran (AP) — Iran’s president on Wednesday warned the U.N. nuclear watchdog to expect a “stern response" from his country regarding the agency's demands for Iran to provide access to sites where Tehran is thought to have stored or used undeclared nuclear material.

In a televised speech, President Hassan Rouhani said a stern response “is easy" for Iran but that the country prefers cooperation with the U.N. watchdog.

The remarks reflect Tehran's irritation at a resolution adopted last week by the board of the International Atomic Energy Agency demanding access to the sites. The resolution was proposed by Germany, France and Britain while Russia and China voted against it.

Iran has dismissed allegations of nuclear activities at the sites in question.

Rouhani said on Wednesday that “Iran is still ready to accept legal surveillance by the (U.N.) agency and would continue close cooperation within the legal framework” of the 2015 nuclear deal between Tehran and world powers.

The IAEA resolution came after the agency's Director General Rafael Grossi reiterated concerns that Iran had denied for more than four months access to U.N. inspectors to two locations “to clarify our questions related to possible undeclared nuclear material and nuclear-related activities.”

Activities at the sites are thought to have been from the early 2000s, before Iran signed the nuclear deal. Iran maintains the IAEA has no legal basis to inspect them.

“The agency should not exit its legal path,” said Rouhani, stressing that the issues raised “belong in the past, dating 18 to 20 years ago.”

It is not clear what effect the new resolution will have on the nuclear deal but Iran has threatened unspecified consequences.

The IAEA maintains that of the two sites that Iran has blocked access to, one was partially demolished in 2004. At the other, the agency said it observed activities “consistent with efforts to sanitize” the facility from July 2019 onward.

A third site, the IAEA said, had undergone “extensive sanitization and leveling” in 2003 and 2004 and there would be no verification value in inspecting it.

The watchdog also said Iran has “not engaged in any substantive discussions” with the IAEA for almost a year to answer the agency's questions about possible undeclared nuclear material and activities. The agency also said that Iran has continued to increase its stockpiles of enriched uranium and remains in violation of the nuclear deal.

In 2018, President Donald trump pulled the U.S. out of the deal and reimposed sanctions on Iran. Tehran has since then hoped that the other signatories to the deal — Germany, France, Britain, Russia and China, which have been struggling to save the accord — would increase economic incentives to make up for hard-hitting sanctions imposed by Washington after the U.S. withdrawal.

Iran accuses the U.S. of trying to prevent that by pressuring the countries still in the deal. Meanwhile, Iran has been violating its restrictions, including the amount of uranium it can enrich and the purity of enrichment, to try to pressure the five countries.

“We expect the agency to preserve its independence," Rouhani said.