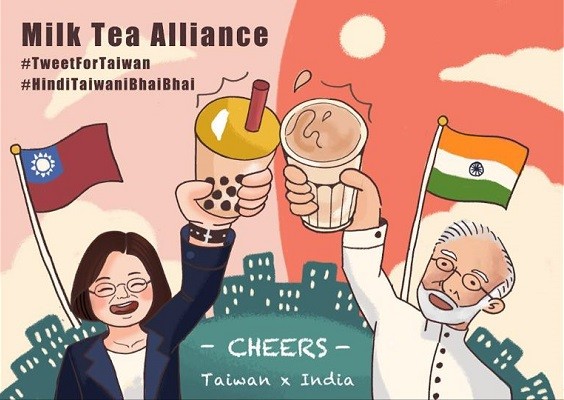 TAIPEI (Taiwan News) — A meme showing a new online alliance between Taiwan and India is trending on Twitter as both countries have had to deal with aggressive military actions by China.

In early May, when Taiwan was trying to garner global support to join the World Health Assembly (WHA), as much as 49 percent of netizens tweeting in favor of Taiwan's participation were from India. Later, netizens on Twitter joked that India should join the viral "Milk Tea Alliance" with Thailand, Hong Kong, Taiwan, and Australia.

After Taiwan was yet again excluded from the meeting due to pressure from China, Digital Diplomacy Lab on May 20 created a meme titled "Milk Tea Alliance" that showed Taiwanese President Tsai Ing-wen (蔡英文) with a cup of bubble tea on the left and Indian Prime Minister Narendra Modi holding up a glass of Indian spiced tea on the right. The meme included the hashtag #HindiTaiwaniBhaiBhai, which in Hindi means "India Taiwan brother brother" and complements the anti-China hashtag #HindiCheeniByeBye (India China bye bye).

On June 16, a melee broke out between Indian and Chinese troops on a disputed stretch of border in the Ladakh region, with the Indian side suffering 20 dead and the People's Liberation Army (PLA) seeing at least 35 slain, including a commanding officer. The incident sparked outrage across India, prompting many to call for a boycott of Chinese-made products and burn effigies of Chinese Chairman Xi Jinping (習近平), with a flurry of anti-China memes spreading on social media.

The Chinese Communist Party (CCP) has since had to enter damage control mode, deleting the incident from state-run media pages and social media sites. It was, however, a boon for relations between Taiwan and India, with hashtags such as #TaiwanStandsWithIndia and a meme showing Rama slaying a dragon trending on social media.