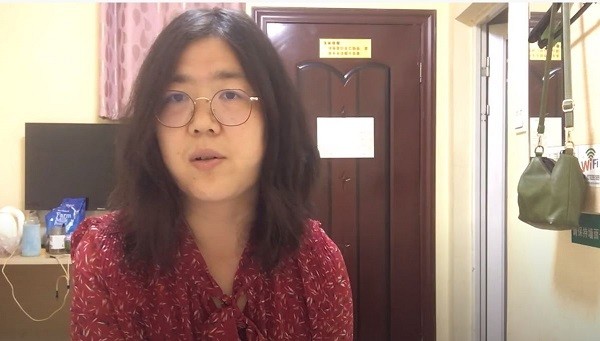 TAIPEI (Taiwan News) — Chinese human rights activist and civilian journalist Zhang Zhan (張展) is confirmed to have been prosecuted in Shanghai on June 19 for "disturbing the peace" after being detained for more than one month.

Zhang began reporting in Wuhan in February, sharing articles and street interviews on social media. Her reports documented life amid China's lockdown and citizen's resentment toward the government, irritating the authorities and leading to her arrest.

She went missing on May 14 before the Shanghai police notified her parents that she had been detained on criminal charges.

A former lawyer, Zhang has previously been critical of the Chinese Communist Party (CCP). The Shanghai police have summoned and threatened her several times in the past for expressing her views.

In 2019, she began disseminating material online in support of the Hong Kong protests. Last September, after she demonstrated publicly by holding an umbrella with the words "Terminate socialism, Replace the CCP," the police detained her for more than two months, allegedly forcing her to undergo testing for psychopathy twice, according to 維權網, a Chinese human rights-related blog.

In one audio recording, Zhang said that while state media insisted the coronavirus outbreak was under control, the crematorium furnaces in the city were running day and night. She also indicated that Wuhan's official figures for its coronavirus cases were erroneous, as only patients showing severe symptoms could receive tests during the peak of the outbreak.