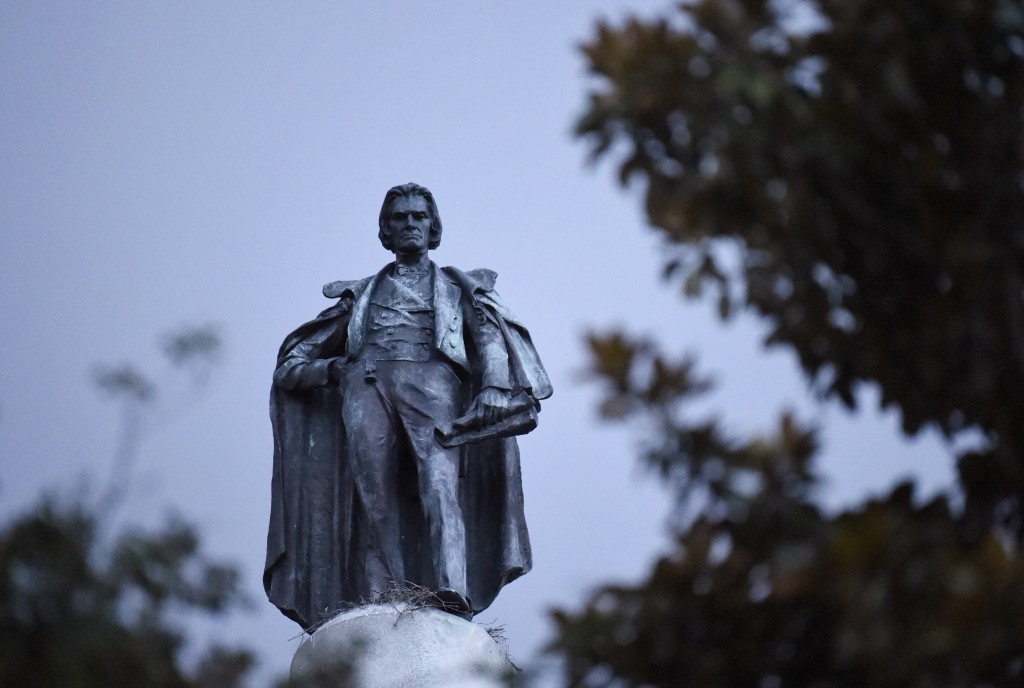 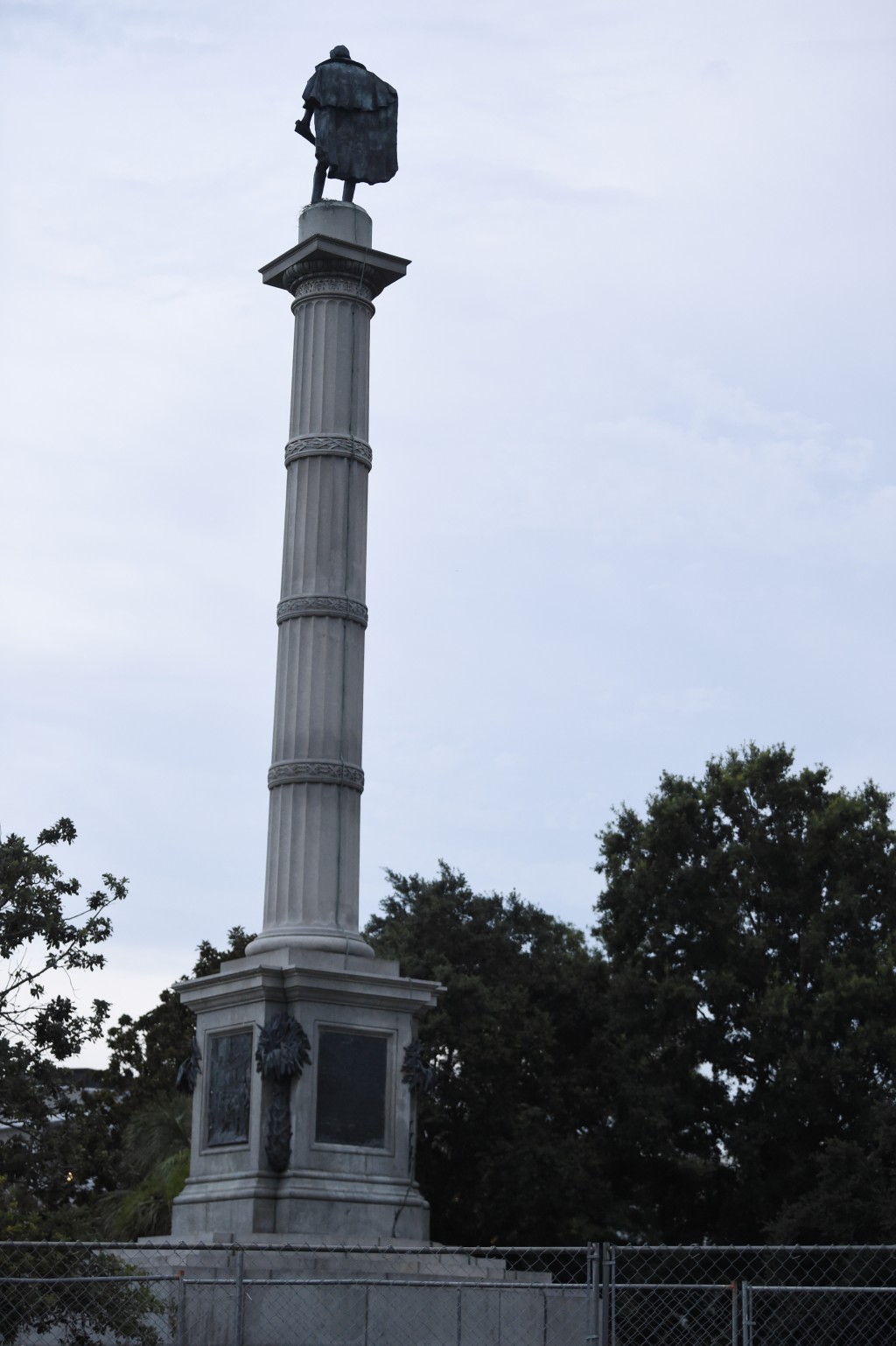 CHARLESTON, S.C. (AP) — Officials in the historic South Carolina city of Charleston voted unanimously Tuesday to remove a statue of former vice president and slavery advocate John C. Calhoun from a downtown square, the latest in a wave of actions arising from protests against racism and police brutality against African Americans.

Council members approved the measure 13-0 at a late-day meeting. The resolution authorizes the removal of the statue of the former U.S. vice president and senator from South Carolina from atop a 100-foot (30-meter) monument in downtown Marion Square.

City officials said eventually that the Calhoun statue will be placed permanently at “an appropriate site where it will be protected and preserved.”

Just before midnight on Tuesday the Charleston Police Department tweeted that, “Calhoun Street between Meeting Street and King Street is closed for the removal of the John C. Calhoun statue," adding that the street will be closed for several hours.

Just before 1 a.m. Wednesday, workers using massive cranes began to bring the statue down from its 100-foot (30-meter) monument in downtown Marion Square. A few hundred people gathered at the scene, mostly in favor of removal.

The vote comes a week after the mayor, John Tecklenburg, announced he would send the resolution to the City Council. He also took part in the vote.

“I believe that we are setting a new chapter, a more equitable chapter, in our city’s history,” Tecklenburg said, just before the vote. “We are making the right step. It’s just simply the right thing for us to do.”

Council members heard from dozens of residents for and against the statue's removal. Councilman Karl L. Brady Jr. said he knew his support may cost him votes but that he was voting his conscience in a move he said shows that, in Charleston, “we place white supremacy and white supremacist thought back where it belongs - on the ash heap of history.”

The move comes days after the fifth anniversary of the slaying of nine Black parishioners in a racist attack at a downtown Charleston church. It also comes as cities around the U.S. debate the removal of monuments to Confederate leaders and others after the policy custody death of a Black man, George Floyd, in Minnesota.

The ultimate resting place of the statue has yet to be determined, a decision that will be left up to a special panel. The mayor has anticipated it would go to a local museum or educational institution.

Last Wednesday when Tecklenburg announced his plans to remove the statue, dozens of protesters linked arms around the monument, shouting, “Take it down!” Video posted on Twitter also showed signs and spray-painting on the monument. Police said they made several arrests for vandalism and ultimately closed off the area overnight.

In the heart of downtown Charleston, Calhoun towers over a sprawling square frequented by locals and tourists alike that is a frequent venue for festivals and large public events. Several organizers have said recently that they would no longer use the space while the statue remained.

About 40% of enslaved Africans brought to North America came through the port city of Charleston, which formally apologized in 2018 for its role in the slave trade. In its resolution, the city says the statue, in place since 1898, “is seen by many people as something other than a memorial to the accomplishments of a South Carolina native, but rather a symbol glorifying slavery and as such, a painful reminder of the history of slavery in Charleston.”

Calhoun’s support of slavery never wavered. He said in several speeches on the U.S. Senate floor in the 1830s that slaves in the South were better off than free Blacks in the North while calling slavery a “positive good.”

Tecklenburg said the removal isn’t covered under South Carolina’s Heritage Act, which protects historical monuments and names of buildings, as the monument is not on public property or in commemoration of one of the historical events listed in the act. According to the National Parks Service, the city technically leases the land where the monument sits, which “is to be kept open forever as a parade ground for the Sumter Guards and the Washington Light Infantry.”

Thus far, Tecklenburg’s interpretation has not been legally disputed. A two-thirds vote from the state General Assembly is required to make any changes under the Heritage Act, a tough task in a state where conservatives dominate the House and Senate, last used to remove the Confederate flag from Statehouse grounds in 2015.

During a news conference at the Statehouse on Tuesday, Gov. Henry McMaster described the Heritage Act as a “good state law” and a “deliberate process that is not influenced by passion and time.” When asked about Tecklenburg's assertion that the law doesn't apply in this instance, McMaster - a former prosecutor - called it a “legal question,” adding, “It depends on how you read the Heritage Act, and there are people who read it in different ways.”

Several Black lawmakers are urging local governments and colleges to act on their own and defy the monument protection law because it carries no stated penalties and hasn’t faced a court challenge, and several are planning to do so.

Meg Kinnard can be reached at https://twitter.com/MegKinnardAP.