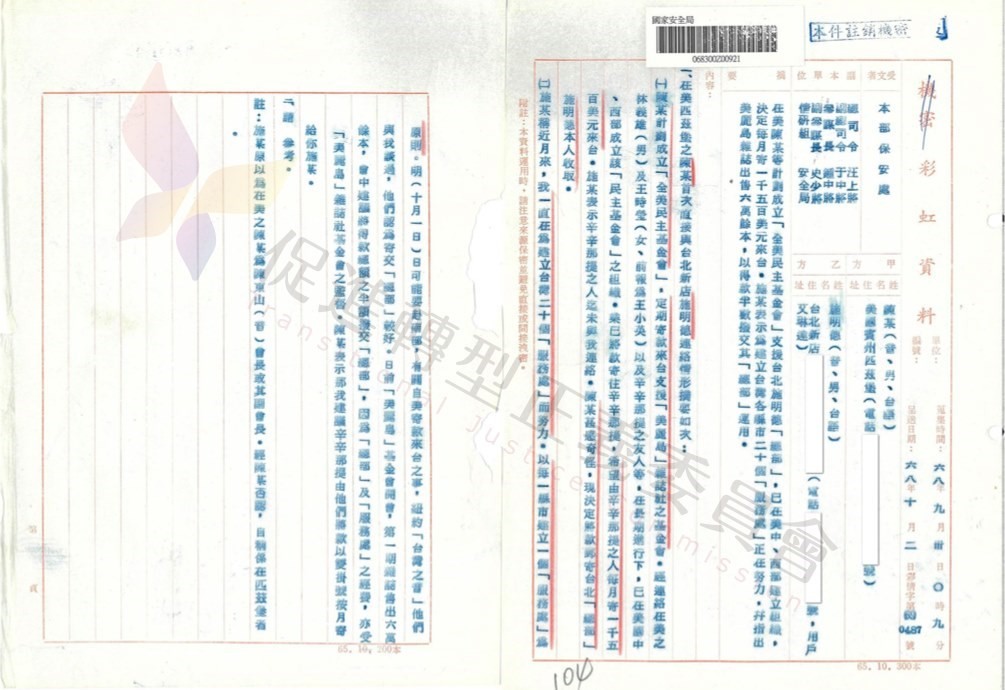 TAIPEI (Taiwan News) — Due to the many political files declassified as part of the Tsai Ing-wen (蔡英文) government's efforts to promote transitional justice, close ties between the Kuomintang (KMT) and notorious Taiwanese gang the Bamboo Union (竹聯幫) have recently come to light.

Earlier this year, a government-funded Transitional Justice Database was launched, which revealed a connection between the KMT and gangsters during the brutal period that followed the island nation coming under the control of the party in 1949. This was when tens of thousands of intellectuals, social elites, and political dissidents were secretly tried, jailed, and murdered.

One of the figures who participated in the mayhem of that era was secret agent-turned businessman Lin Ting-li (林頂立). Lin headed the now-defunct Secrets Bureau and had close ties with the country's gangsters.

According to secret documents analyzed by Mirror Media, before the mid-1980s, some gangsters were employed in Taiwan by government and news agencies, including the National Security Bureau and the Intelligence Bureau; some were even hired as close aides to Chiang Hsiao-yung (蔣孝勇), one of the grandchildren of the late dictator Chiang Kai-shek (蔣介石). The 36-year-old files were left behind by the Taiwan Garrison Command, a secret police agency founded in 1945.

Since 1960, up to 19 Bamboo Union gangsters have risen to top government positions after graduating from military, police, and intelligence academies. Some of them have even entered the film industry or ran newspapers or magazines.

A reputed former leader of the Bamboo Union has confirmed some details about the documents, including the close relationship between the Chiang family, the KMT, and organized crime elements.

Chang An-lo (張安樂), who was mentioned in the documents, during a recent interview with Mirror Media recounted the history of a high-profile murder case in 1984. Chang, an ultra-nationalist gangster-politician known as the White Wolf, studied and worked in the U.S. in the late 1970s.

In 1984, Chang learned that his fellow gangsters Chen Chi-li (陳啟禮) and Wu Dun (吳敦) were sent by the intelligence bureau chief Wang Hsi-ling (汪希苓) to assassinate Taiwanese expatriate writer Henry Liu (劉宜良), who published a book that reportedly displeased the Chiang family. The ultimate hand behind the assassination, however, remains hidden today behind a Rashomon-like cascade of accounts.

Reputed Bamboo Union figure Liu Mao-chuan (柳茂川), a close partner of Chen, told Mirror Media that it was Chiang Hsiao-wu (蔣孝武), another grandchild of Chiang Kai-shek, who dispatched the two gangsters through Wang to kill Henry Liu. However, the relationship between the KMT and the Bamboo Union soured in 1984, when Chang broke the news in the U.S. the KMT was responsible for the murder of the writer.

The Bamboo Union extended its reach overseas in the 1970s, when the mobsters became active around the world, with operations in the U.S., Hong Kong, Japan, and the Philippines.

In the early 1980s, an unnamed governor of a Philippine province engaged in significant arms sales to the Bamboo Union, peddling guns to convicted murderer and drug dealer Liu Huan-rong (劉煥榮), according to the declassified document. The late Liu, who was executed by Taiwan's authorities in 1993, is believed to have been connected to the Philippine military.