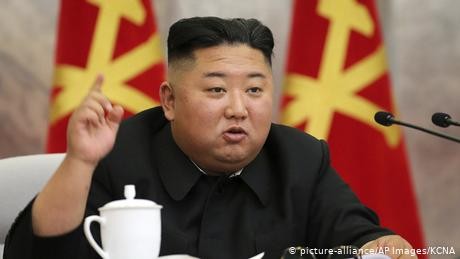 The decision was made during a meeting of the ruling party's Central Military Commission, where members "took stock of the prevailing situation" before Kim decided to suspend the military's retaliatory measures.

The report did not elaborate on the reasons for the decision. The committee also discussed bolstering "the war deterrent of the country," KCNA reported.

Last week, Kim's sister Kim Yo Jong — who has become the public face of the North's recent bashing of the South — warned of retaliatory measures last week. She said the plans could involve the military but did not elaborate on what was being considered.

Tensions between Pyongyang and Seoul have been escalating for weeks, with North Korea particularly angered over South Korea's failure to stop activists from sending anti-North Korea leaflets across the border.

Last week, the North blew up an unused inter-Korean liaison office and later threatened to send 12 million propaganda leaflets to the South.

North Korea's military said it had been looking into an "action plan" that included reoccupying border guard posts that were abandoned under the inter-Korean deal, as well as sending troops into shared tourism and economic zones.

Some experts speculate Kim's move to suspend the North's military plans is a bid to try and coax out concessions from the South. But any major moves would likely be impossible for South Korea to agree to, as they would bump against international sanctions imposed on Pyongyang over its nuclear weapons program.

Nuclear disarmament talks between North Korea and the United States have also stalled in recent months, after the US rejected North Korea's demands for sanctions relief in exchange for smaller concessions in its nuclear program.