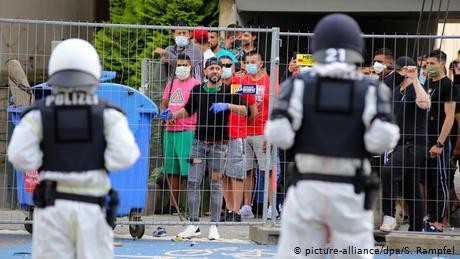 The city of Gütersloh in western Germany, population 103,000, isn't often in the international spotlight. But the massive outbreak of COVID-19 at the Tönnies meat processing plant, based just outside the city, has been making headlines in recent days.

Of the roughly 7,000 employees who have been tested for the disease in the last week, more than 1,550 have turned up positive. All the plant's employees have been quarantined, schools and day care centers in the area are closed and on Tuesday, North Rhine-Westphalia State Premier Armin Laschet announced fresh lockdown restrictions on Gütersloh and the neighboring district of Warendorf.

Other regions in Germany are also facing local outbreaks: 370 households have been quarantined in the Berlin district of Neukölln, where almost 100 residents have tested positive, and authorities in Göttingen have sealed off a high-rise complex where about 120 people are infected. There have also been major outbreaks linked back to a number of church services across the country.

Local outbreaks across Europe, in Israel

Germany isn't the only country facing local infection clusters. While almost all countries in Europe have begun relaxing their lockdown restrictions, new viral hot spots have popped up across the continent, for the most part within families, companies or restaurants.

In Wales, at least 175 workers have tested positive for COVID-19 in a poultry factory in Anglesey, and authorities have warned that a local lockdown could be enforced. Workers in factories in Yorkshire and Wrexham have also tested positive for the virus.

"As we begin to ease lockdown in society, such clusters of outbreaks will occur and we do expect these," said Dr. Giri Shankar of Public Health Wales. "So we shouldn't be surprised, but we should be concerned and take swift action."

In a nursing home in the Austrian town of Liesing, near Vienna, six residents, some of whom had serious preexisting conditions, died in the first two weeks of June of COVID-19. In May, more than 70 employees tested positive in postal sorting facilities in Vienna and Lower Austria. And just over a week ago, after a Rotary Club meeting in Salzburg, 14 participants tested positive for the virus. Hundreds of people who came in contact with these people have already been identified and tested, or will be in the coming days.

Read more: Jerusalem: An eerily different Easter in the time of coronavirus

In Israel, the government imposed a nationwide lockdown in the early stages of the pandemic, even turning to the domestic intelligence service to help deal with the situation. The number of cases remained comparatively low, and many regulations were relaxed in mid-May. Now, however, faced with at least 300 new infections per day, the country is fearing a second wave. Schools have been particularly affected, and around two fifths of the country's schools have once again closed their doors.

When the number of infections begins to spike once again, it's important to identify the type of cluster, said Peter Klimek, a researcher at the Complexity Science Hub in Vienna and part of a team of scientists advising the Austrian government on the coronavirus pandemic.

"If the clusters are small it's not so worrying, because we can trace the contacts," he said. "If a cluster occurs at a major event, processing and tracking the cluster naturally becomes much more difficult."

Klimek said it makes a difference whether the cases come from a single cluster where the infection chains can be traced, or whether 50 people all across the country go to see their doctors because they've started presenting symptoms. If several difficult-to-trace clusters were to appear within a short period of time, he said, this could be enough to lock down an entire country.

The most important measures when it comes to local outbreaks are the four Ts, said Klimek: tracking, tracing, testing and treatment.

When a person tests positive for the virus, his or her recent contacts must be traced quickly. Those who have been infected must be isolated and treated, and other people in their vicinity must also be tested. If this process works, local outbreaks can be kept well under control, said Klimek.

Heading off another shutdown?

A closer look at the rate of infections in Europe and Israel shows, however, that the four Ts aren't always enough. In Bulgaria, the government recently reintroduced mandatory face masks for public places like shopping malls, shops, cinemas and theaters, just a short time after dropping the face mask requirement. An increase in infection figures in recent days prompted the government to take this step.

Israeli Prime Minister Benjamin Netanyahu has also warned his citizens about the rising number of infections. "If we don't change immediately our behavior regarding wearing masks and keeping distance, we will bring upon ourselves, against our will, a return to lockdowns. None of us wants this," he said on Sunday. A few areas in Tel Aviv's Jaffa district have already been sealed off, as have two Bedouin communities in the south of the country.

In Luxembourg, on the other hand, the government has decided to test the entire population in an effort to prevent a second wave of coronavirus infections. The country's 628,000 inhabitants and 300,000 cross-border commuters have been divided into groups that will be regularly tested, in order to identify new chains of infection and quickly shut them down.

'There is no cure-all'

The measures adopted to prevent a new hot spot, or quickly contain existing outbreaks, vary from country to country, said Klimek. "There is no cure-all, but rather a mix of measures," he said.

What all regions share is the continued importance of physical distancing measures, along with strict hygiene regulations and a restricted circle of contacts. The move to close schools and restaurants was effective, as is the wearing of face masks, Klimek said. And the sooner such measures are put into practice in future outbreaks, the more effective they are, he said.