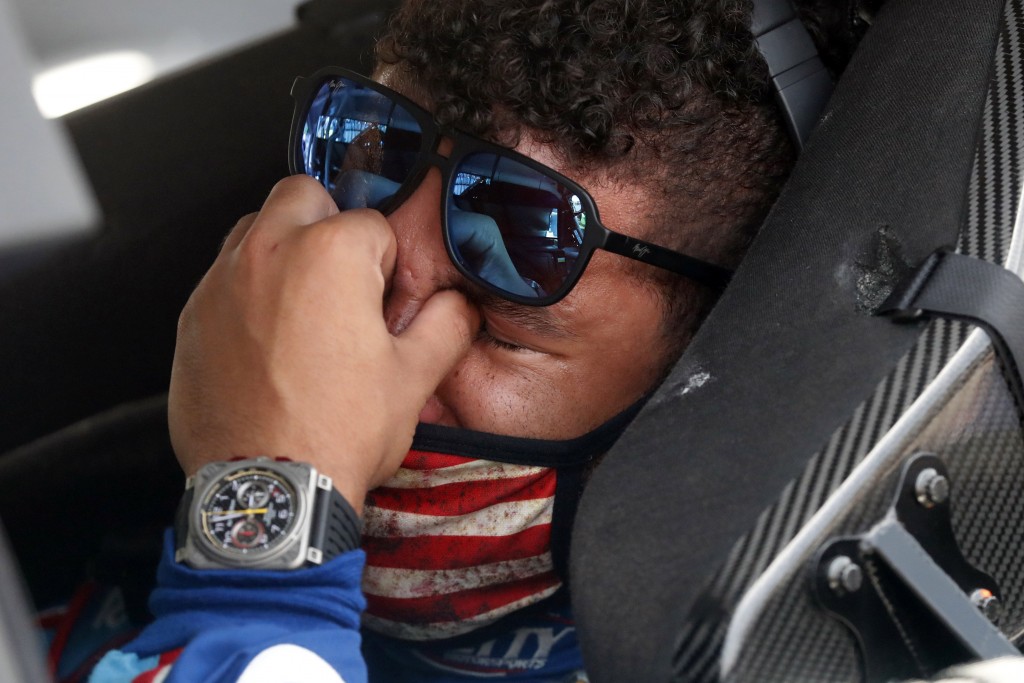 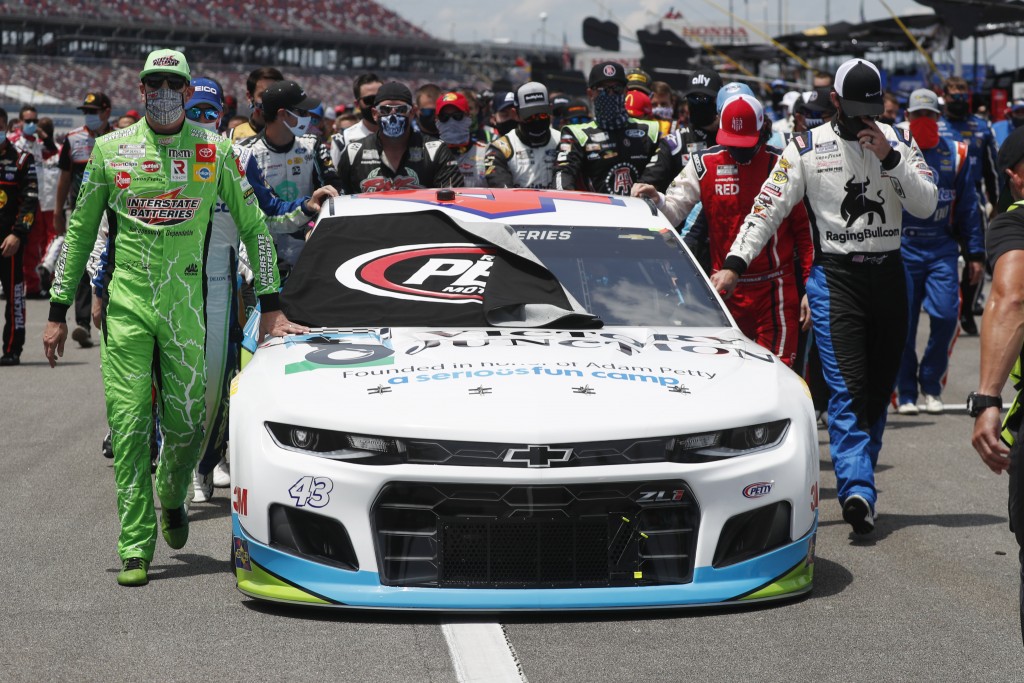 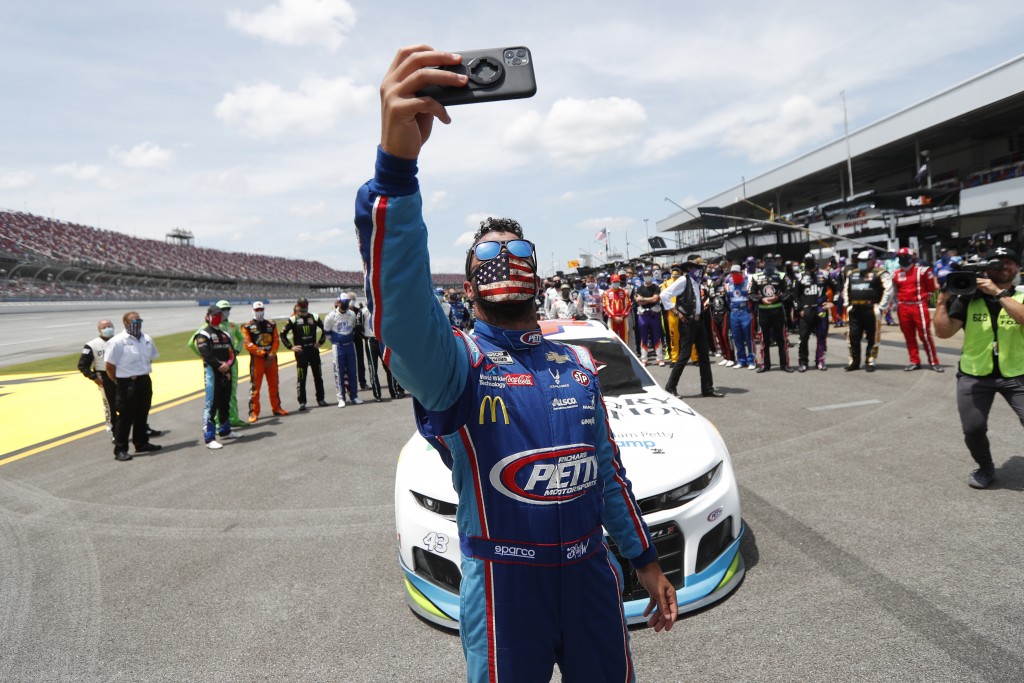 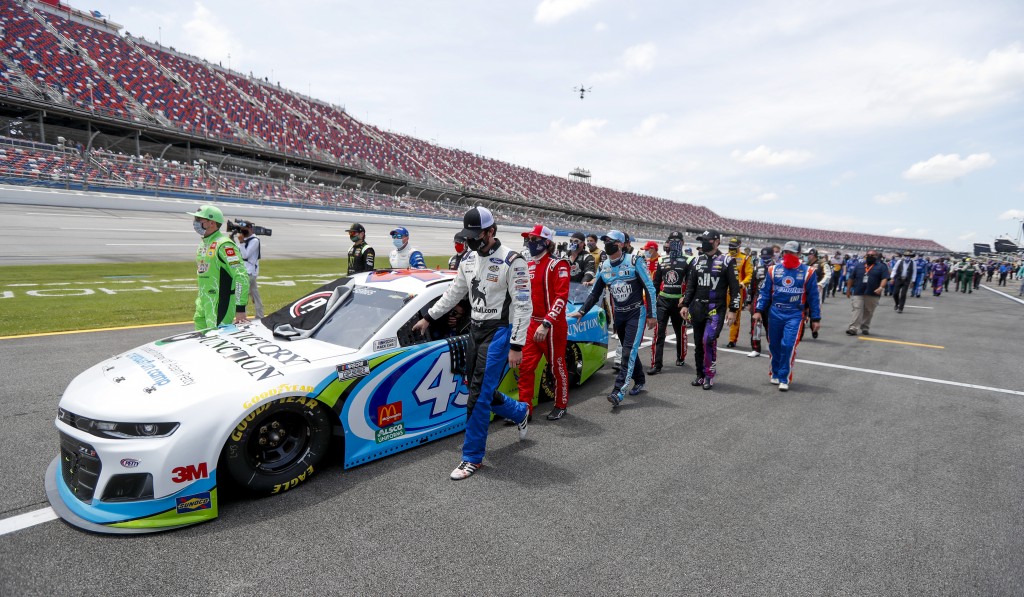 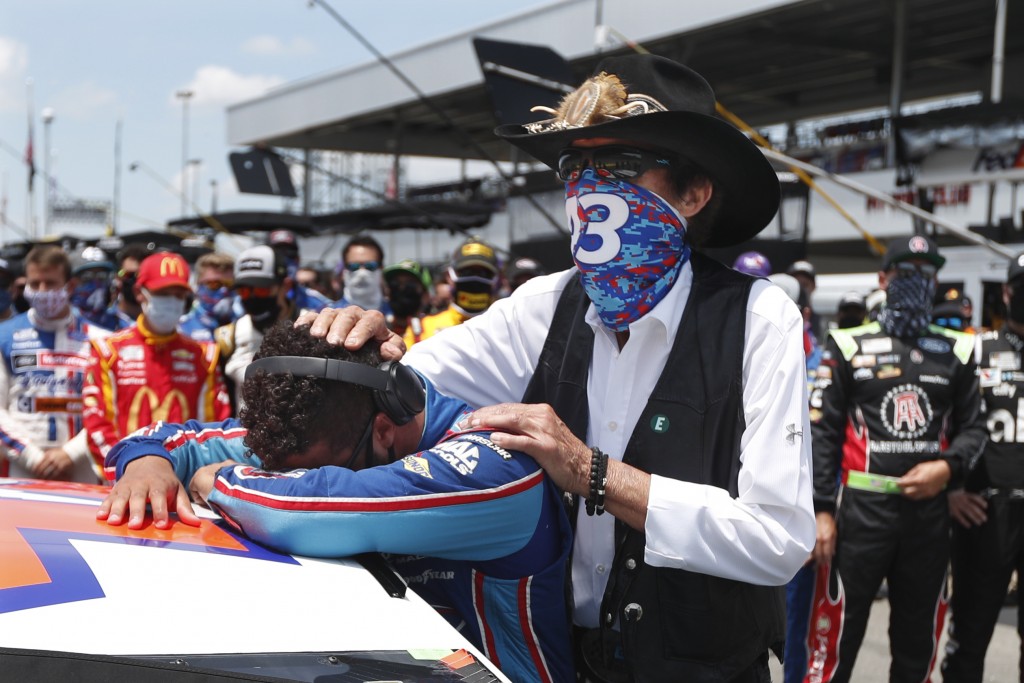 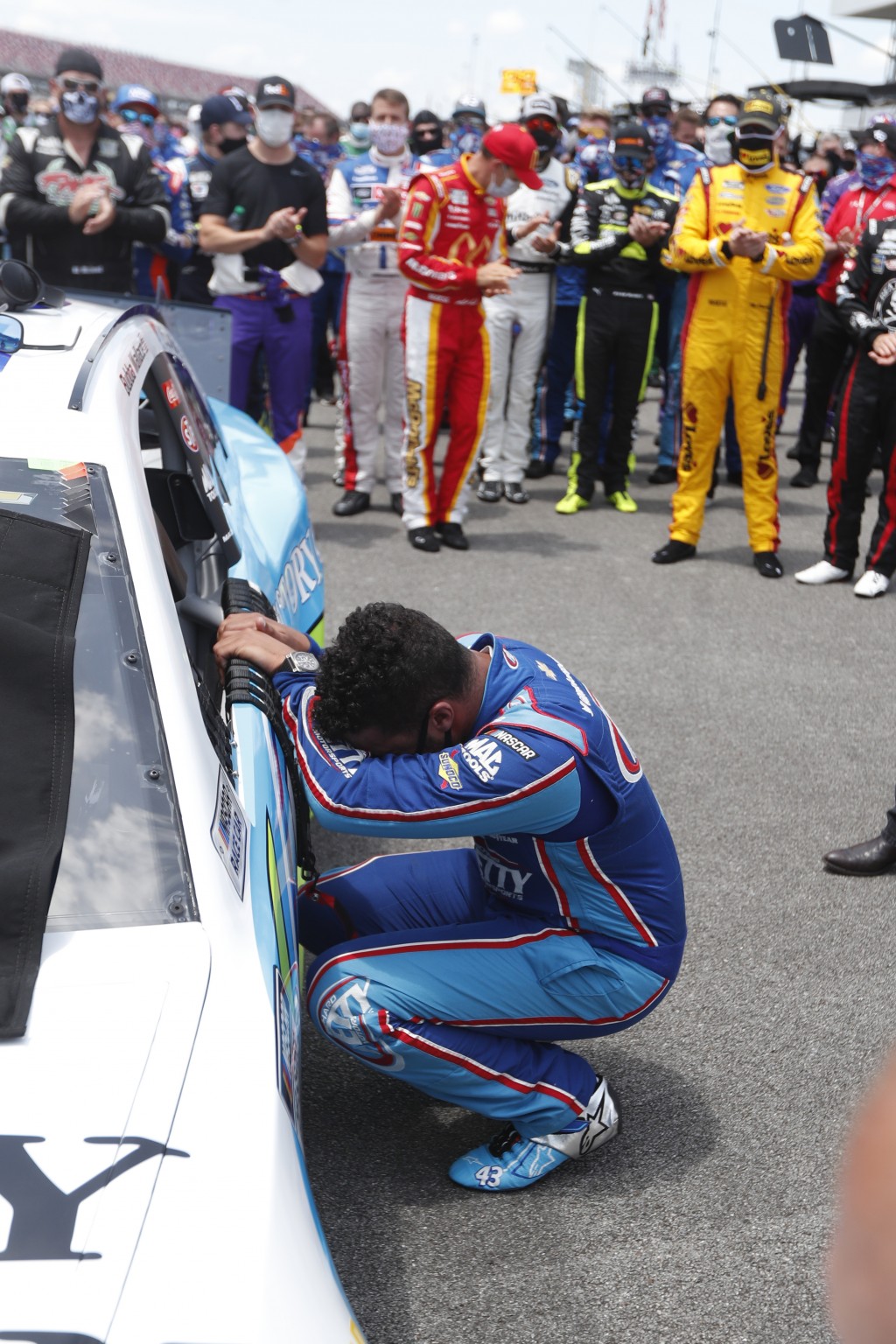 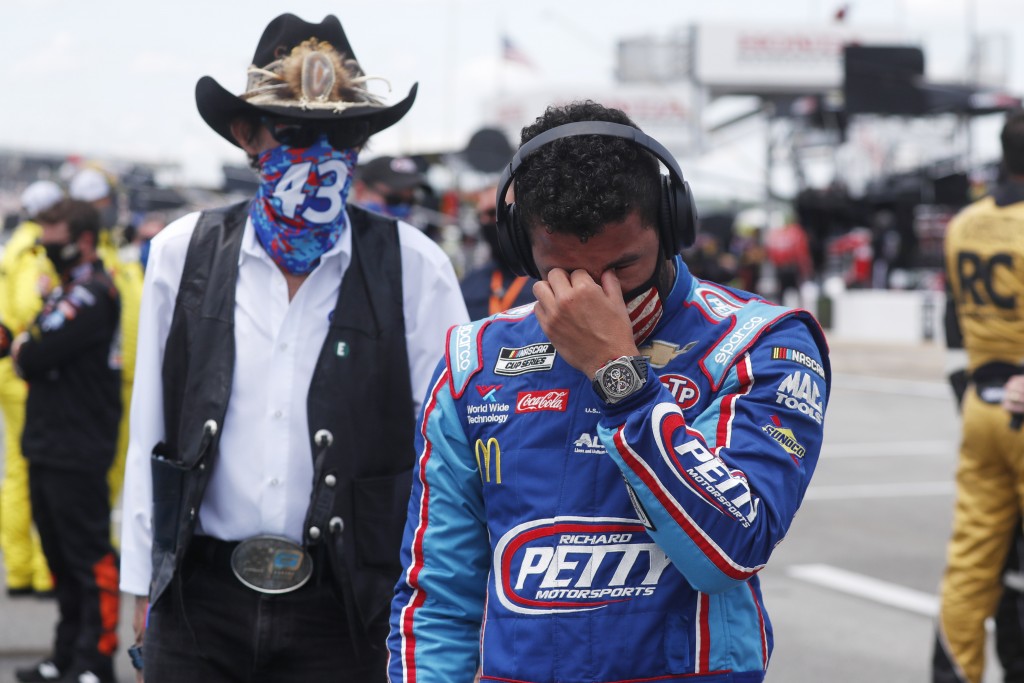 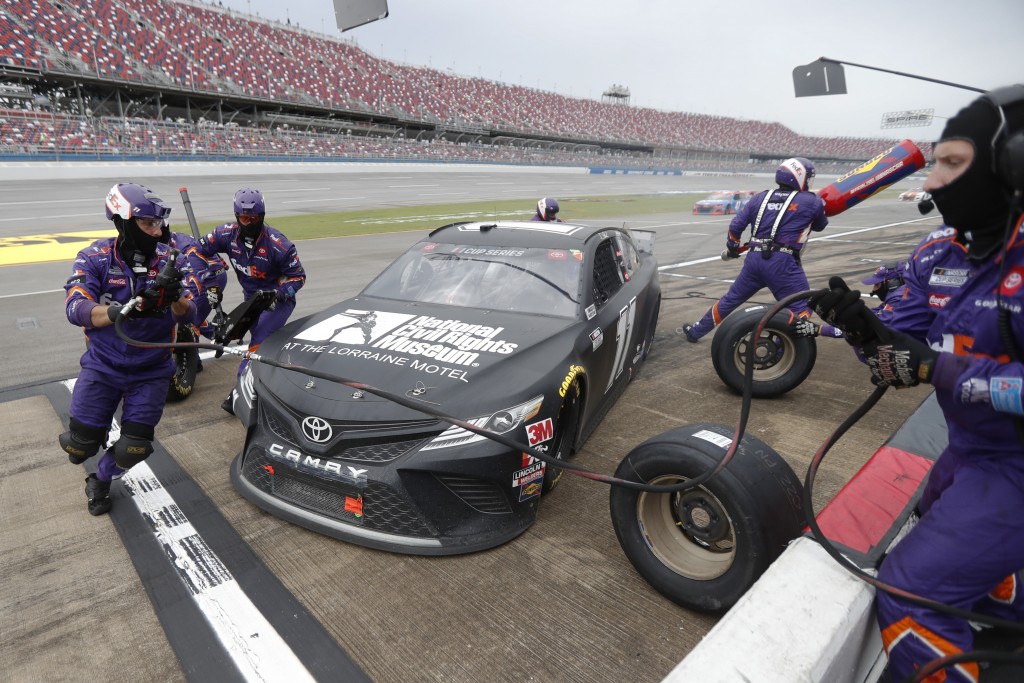 There is no escaping it: NASCAR is a white-dominated sport with a predominantly white fan base and a longstanding reputation as being far from inclusive. Its evolution, such as it is, has been halting and awkward. One step forward, seemingly a half step back.

The stock car series listened to Bubba Wallace — far from the first to ask — and banned the Confederate flag from its events earlier this month. In some sports, that might have been enough.

Not in NASCAR; everyone figured some fans would ignore it and force someone to somehow enforce the ban.

No one figured on what came next and that was this: NASCAR held a race on Monday while federal agents were a stone’s throw away trying to find out who left a noose in Wallace’s garage stall at Alabama's Talladega Superspeedway.

It could have been the lowest point in NASCAR's 72-year history.

Instead, the drivers fought back to protect their image, their sport and their friend. In one of the most poignant and important moments in memory, NASCAR stood together and marched together in solidarity for Wallace, the only Black driver at the top level of stock car racing.

Drivers don't do this often. They can be friendly or even best friends with each other, but the feuds and rivalries are real. It's a solitary sport. The last such instance of solidarity came 22 years ago when the late Dale Earnhardt finally won his only Daytona 500 and crews lined pit road to high-five him as he headed to victory lane.

This was a far different and far graver situation as every one of the 40 teams on the grid lined up to defend Wallace as well as their series in an effort to show they do not and will not tolerate racism.

The moment evolved on the drivers’ group text when seven-time champion Jimmie Johnson said he planned to stand next to Wallace during the national anthem. Others said they’d join, then Kevin Harvick suggested they all push Wallace’s car to the front of the grid. Crew members caught wind of the plan and wanted to participate.

Johnson wasn’t sure how the moment would develop or how many planned to participate. But when he looked behind him Monday, all 39 of Wallace’s rivals and their team members had joined the procession.

“When I woke up (Monday), read the news ... my blood was boiling. I could not believe that that had happened,” Johnson said. "As momentum built and the awareness of the statement the garage was going to make, how many people reached out, how many people wanted to be involved, it shifted to just great pride for our sport.”

The same group chat led to a drivers' video message calling for equality. And many noticed that FedEx replaced its logos on Denny Hamlin’s car to instead spotlight the National Civil Rights Museum – just the 18th time in 519 races the company relinquished its branding on the car.

“The sport is changing,” a smiling Wallace declared after Monday’s race, where he finished 14th after a strong showing before greeting a group of cheering fans pressed against the fence.

The 26-year-old Wallace remains a rarity for NASCAR, which officially launched a diversity program in 2004. It helped Wallace make it to the Cup Series, as well as Daniel Suarez, who is Mexican, and Kyle Larson, who is Japanese. But the promotion rate from the program to the NASCAR’s top series is low. Aric Almirola, who is of Cuban descent, started with a diversity program ran at the time by Joe Gibbs Racing.

Ricky Stenhouse Jr., a Mississippi native who for almost his entire career has worn the state flag on his firesuit, said he removed it a few weeks ago because it includes the Confederate flag.

“I’ve always been proud to be from Mississippi. I’ve always supported or wore the flag on my belt. I’ve never really thought of it offending anybody,” Stenhouse said. “Obviously with everything that’s going on in the country, with the rebel flag, learning really how it offends so many people, I don’t intend to do that. We wanted to take initiative to take that off before we felt like somebody wanted us to.”

There are likely more challenges ahead.

Given the limited access rules in place right now across NASCAR, it is possible that the person who left the noose that was discovered Sunday by a crew member for Wallace's race team was standing on pit road with him during the show of support. Whether the FBI and NASCAR will find the perpetrator is an open question; whomever it is faces a lifetime ban from the sport along with potential hate crime charges.

For now, drivers will try to stay on offense. They say they are determined to stand with Wallace and show this generation is a far cry from any racist good 'ol boys of NASCAR's past.

Ryan Blaney, one of Wallace's closest friends since childhood, won at Talladega after a sleepless night in his motorhome. Wallace had come to him and told him about the noose and Blaney “felt a mixture of anger and sadness for him, confused how anybody could do something like this.”

“You can’t let some idiot trying to threaten somebody, you can’t let that affect you,” Blaney said. “If you let it really eat away at you, that person wins, those people win. I don’t want it to be remembered as a terrible day or a bad day in NASCAR. I want it to be remembered as there was an incident and we all overcame it together, showed that we were not going to take it anymore.”