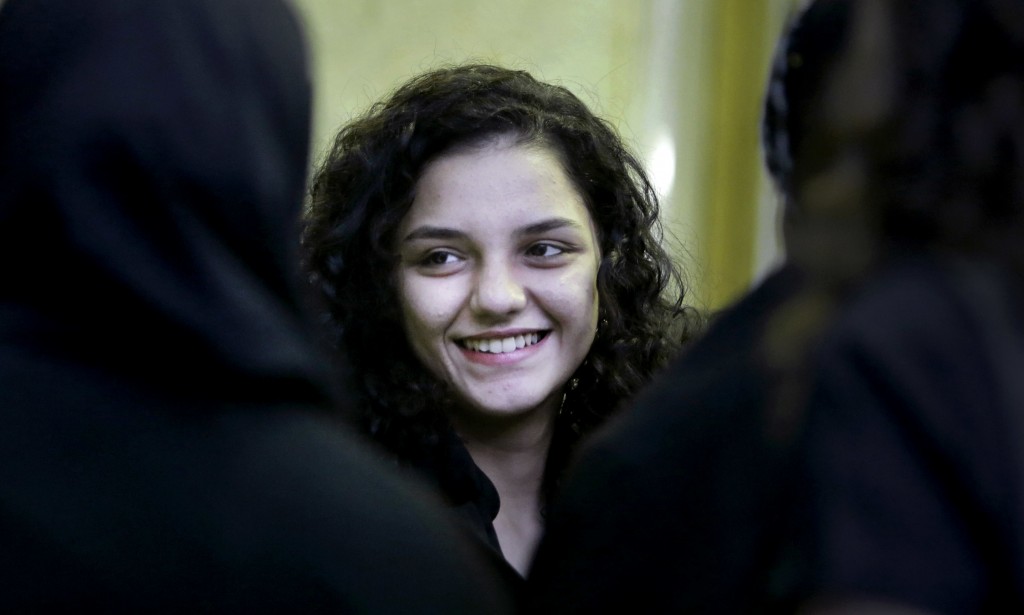 CAIRO (AP) — The family of a leading Egyptian pro-democracy activist, who was arrested amid a clampdown following anti-government protests last year, said his youngest sister was detained Tuesday.

Sanaa Seif, the youngest sister of Alaa Abdel-Fattah, was taken into an unmarked white van by what her family believes were officers dressed in plain clothes from outside the public prosecutor’s headquarters in Cairo. The family had been to the prosecutor's office to file a complaint about an alleged attack outside Cairo’s Tora prison complex the previous day, her older sister Mona Seif said.

There was no immediate statement from authorities on Sanaa Seif's detention and a government media officer said he was not available for comment.

Sanaa Seif appeared less than two hours after detainment at the State Security Prosecution office in another Cairo neighborhood, her older sister said, though it was not clear what charges the 26-year-old faces.

The family of Alaa Abdel-Fattah had been going daily for a week to Tora prison hoping to receive a letter from Alaa that prison officials had promised they would pass to them, the family said in a series of posts on social media.

In their posts, they said a group of women attacked them when they were sleeping outside the prison complex, beating the two sisters and their mother — all of them activists — and stealing their belongings while security officials stood nearby.

“Sanaa came to join us at the public prosecutor’s officer so the prosecutors could see the bruises on her body from yesterday’s attack,” Mona Seif said.

Alaa Abdel-Fattah, who rose to prominence with Egypt's 2011 uprising, was among more than 2,900 people who activists say were arrested following the small and rare September protests that demanded President Abdel Fattah el-Sissi step down.

His arrest on Sept. 29, 2019 came a few months after he had been released in March following five years in prison for taking part in a peaceful protest against the military trials of civilians.

Abdel-Fattah had been detained several times before under different governments for lobbying for civil rights on social media and in public. An influential blogger, he hails from a family of political activists, lawyers and writers. His late father was one of Egypt’s most tireless rights lawyers and his sisters are also political activists. His aunt is award-winning novelist Ahdaf Soueif.

To many, Abdel-Fattah's imprisonment in 2013 after el-Sissi rose to power — at a time when authorities imposed draconian laws banning public gatherings and unauthorized demonstrations — was another sign of Egypt’s return to autocratic rule.