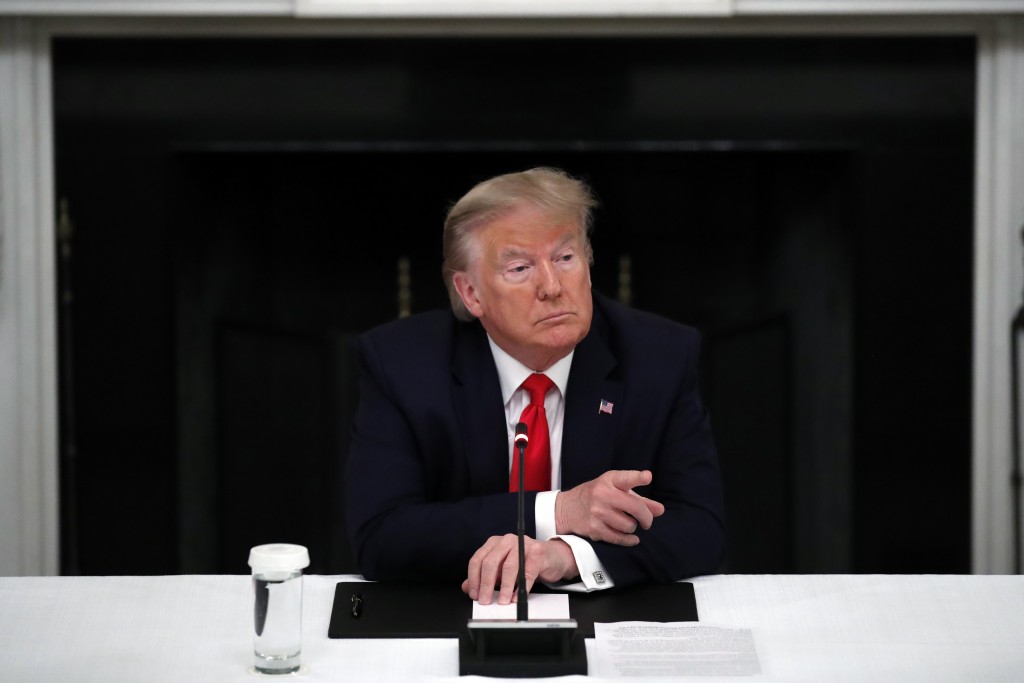 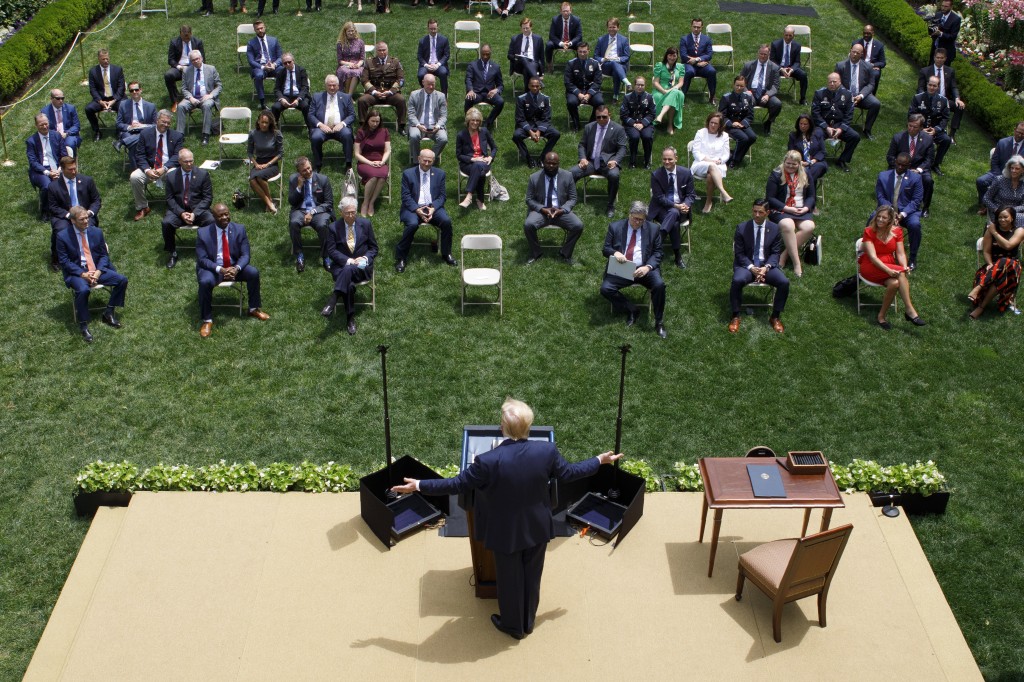 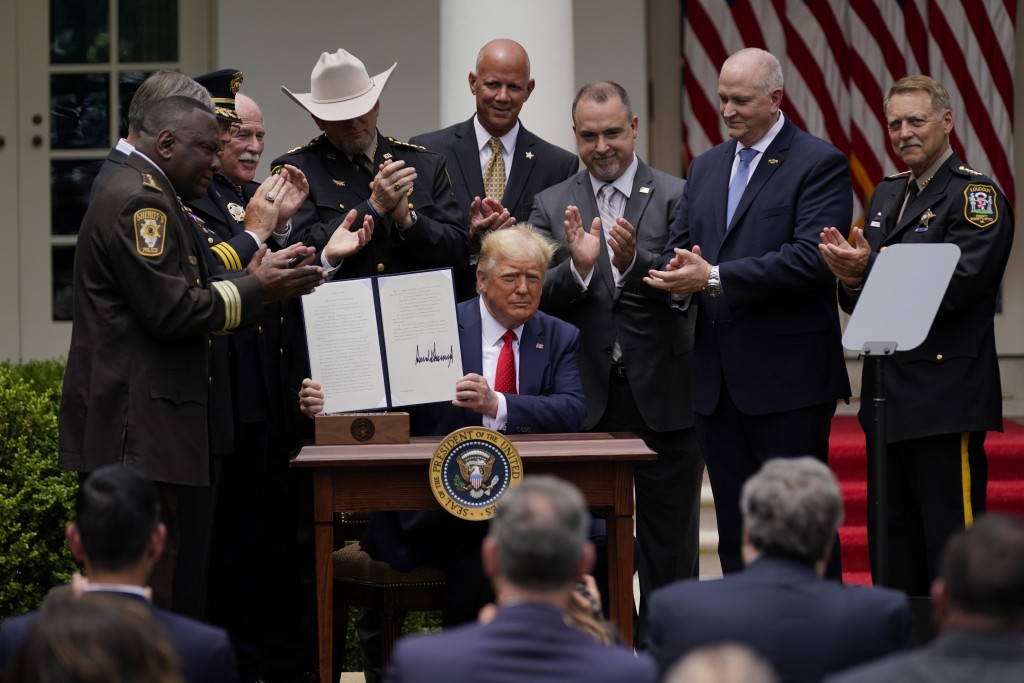 WASHINGTON (AP) — President Donald Trump prefaced the revival of his campaign rallies with days of self-congratulation, a familiar pattern that has not been disturbed by the traumas of this time.

He devoted attention to the Obama administration, trashing it even while claiming some of its achievements as his own. Perhaps most brazenly, he claimed credit for reducing suicides by veterans and offering them same-day emergency mental health counseling at Department of Veterans Affairs centers, achievements he inherited and did not build on.

Trump has been preparing for his Tulsa, Oklahoma, rally on Saturday night, which shaped up to be the first indoor event of such a massive scale since the coronavirus pandemic took hold. Some public health officials implored him to move it outside or postpone it, fearing the event would spread sickness and death. Large crowds were expected both inside and outside.

A look at claims and the reality from the past week:

TRUMP: “Biden got failing grades and polls on his clueless handling of the Swine Flu H1N1. It was a total disaster, they had no idea what they were doing.” — tweet Thursday.

THE FACTS: This is a distorted history of a pandemic in 2009 that killed far fewer people in the United States than the coronavirus is killing now. For starters, Joe Biden, as vice president, wasn’t running the federal response. Federal public health officials were not at all flying blind when the H1N1 pandemic, also known as swine flu, came to the U.S.

Then, the Centers for Disease Control and Prevention’s flu surveillance network sounded the alarm after two children in California became the first people diagnosed with the new flu strain in this country.

About two weeks later, the Obama administration declared a public health emergency and CDC began releasing anti-flu drugs from the national stockpile to help hospitals get ready. In contrast, Trump declared a state of emergency in early March, seven weeks after the first U.S. case of COVID-19 was announced.

VICE PRESIDENT MIKE PENCE: “Oklahoma has really been in the forefront of our efforts to slow the spread. And in a very real sense, they’ve flattened the curve. ... The number of cases in Oklahoma — it’s declined precipitously.” — remarks Monday.

THE FACTS: The curve has actually been spiking higher since late May, not flattening.

Oklahoma did report just 41 new coronavirus cases on May 28, a relative low compared with early April. But infections have since increased. Last weekend, the state posted sharply higher numbers and set a daily record of new cases on Thursday, at 450.

Oklahoma is among the nearly half the states that have seen coronavirus infections rise since May when governors began loosening social distancing orders and as more people were able to get tests.

In Tulsa, the infection rate is also rising steadily after remaining moderate for months. The four-day average number of new cases in the city has doubled from the previous peak in April. The city’s health department director, Dr. Bruce Dart, urged that the rally be postponed, noting that large indoor gatherings are partially to blame for the recent spread.

TRUMP: “I did something good: I made Juneteenth very famous. ... It’s actually an important event, an important time. But nobody had ever heard of it.” — Wall Street Journal interview Wednesday.

THE FACTS: It's not true that no one had heard of it. No doubt it is better known now.

Trump’s campaign originally scheduled its Tulsa rally for Friday, placing it on the date symbolizing the end of slavery, June 19; Trump agreed to shift it to Saturday. Over two days in 1921, whites looted and burned Tulsa’s black Greenwood district to the ground, killed up to 300 black Tulsans and forced survivors into internment camps.

Trump’s comment that no one knew about Juneteenth before the furor created by his rally is contradicted by the years of festivities, the official commemorations by all but a few state governments and routine White House acknowledgments of the occasion.

Trump’s staff members have put out statements under his name each year of his presidency marking Juneteenth.

“Melania and I send our best wishes for a memorable celebration to all those commemorating Juneteenth,” says the 2019 statement outlining events of June 19, 1865, when Union troops arrived at Galveston, Texas, with news that the war had ended and that the enslaved were free.

TRUMP, on abusive policing: “President Obama and Vice President Biden never even tried to fix this during their eight-year period. The reason they didn’t try is because they had no idea how to do it.” — Tuesday at the White House.

THE FACTS: That is false.

Under the Obama administration, the Justice Department opened 25 wide-ranging civil rights investigations into local law enforcement agencies across the country, including police departments in Chicago, Baltimore and Ferguson, Missouri.

Those investigations were aimed at overhauling troubled departments with patterns of civil rights abuses and generally resulted in court-enforceable consent decrees requiring the agencies to commit to a series of fundamental changes with regard to the use of force, stops, searches and more.

Besides that, the Obama White House established a task force to come up with best policing practices and to recommend ways to improve community trust while also reducing crime. That task force released its report in 2015.

Public pressure may be more intense on Congress now to pass sweeping laws on policing, after nationwide protests over the death of George Floyd in Minneapolis. But the limited steps Trump took Tuesday steered around Congress.

THE FACTS: No one has come up with a vaccine for AIDS, nor is there a cure. Nearly 38,000 people were diagnosed with HIV infection in the U.S. and about 1.7 million globally in 2018, according to the latest totals.

Powerful medicines have turned HIV into a manageable chronic condition for many patients, leading to major global efforts to get those drugs to more of the people who need them.

In addition, taking certain anti-HIV drugs every day also can work as prevention, dramatically reducing the chances that someone who is still healthy becomes infected through sex or injection drug use. A small fraction of the Americans who might benefit use that “preexposure prophylaxis.”

Yet there is "no vaccine available that will prevent HIV infection or treat those who have it,” says the U.S. Health and Human Services Department in outlining efforts to develop one.

Trump may have been trying to correct himself when he followed up with the comment that science has “various things” for AIDS.

As for a vaccine to end the coronavirus pandemic, Trump appears confident one will be ready by the end of the year, but public health authorities warn there’s no guarantee that any of the candidates currently being tested will pan out. Dr. Anthony Fauci of the National Institutes of Health says a vaccine by year’s end is conceivable only if everything goes right in final testing this summer.

TRUMP, talking what he's done for veterans: “Every VA medical facility now offers same-day emergency mental health, something we didn’t have or even come close to having.” — remarks Wednesday.

The VA's effort to provide same-day primary and mental health care when medically necessary at every VA medical center was publicized in April 2016, during the Obama administration. By late 2016, the department’s blog announced that goal would be achieved by year’s end.

A Dec. 23, 2016, article in the Harvard Business Review cited new same-day services at all VA hospitals as evidence of notable progress at the department. David Shulkin, then VA secretary, told Congress in late January 2017 the services already were fully in place.

TRUMP, on efforts to reduce the suicide rate by veterans: “We’re working very hard on this problem, and I think we’ve made a tremendous amount of progress. I even noticed your number: 20. Twenty is different than 24. You know what that means: each day. Hard to believe. Each day. But 20 is a big difference, and we’re getting it way down.” — remarks Wednesday.

THE FACTS: No. The veterans’ suicide rate hasn’t improved at all during Trump’s administration. Suicides have gone up by the latest measure.

The VA estimated in 2013 that 22 veterans were taking their lives each day on average (not 24, as Trump put it). But the estimate was based on data submitted from fewer than half the states. In 2016, VA released an updated estimate of 20 suicides per day, based on 2014 data from every state as well as the Pentagon. That's the figure Trump wrongly claimed as his own.

Last fall, VA changed how it counted, removing some active-duty service members and former members of the National Guard and Reserve who had been in the mix. That left a suicide rate of 17 per day by military veterans, a change that reflected no improvement but merely a different methodology.

TRUMP: “They’ve come out of this at a level that’s really inconceivable. By the way, the regular flu, other flus, other things, SARS or H1N1, any of them, if you look at the young people they were affected like everybody else, but for whatever reason with respect to COVID, the numbers are very, very low.” — remarks Monday.

THE FACTS: Although it’s true that children are less likely than adults to develop COVID-19, the CDC has nevertheless counted more than 86,000 infections by the virus in Americans younger than 18.

Trump’s statements overlook severe COVID-19 illnesses and some deaths of children in the U.S., even though kids in general tend to get less sick from it than adults do. He also glosses over the fact that kids can spread disease without showing symptoms themselves.

The CDC in April studied the pandemic’s effect on different ages in the U.S. and reviewed preliminary research in China, where the coronavirus started. It said social distancing is important for children, too, for their own safety and that of others.

“Whereas most COVID-19 cases in children are not severe, serious COVID-19 illness resulting in hospitalization still occurs in this age group,” the CDC study says.

Last month, the CDC also warned doctors to be on the lookout for a rare but life-threatening inflammatory reaction in some children who’ve had the coronavirus. The condition had been reported in more than 100 children in New York, and in some kids in several other states and in Europe, with some deaths.

THE FACTS: Whether justices like or dislike a president is irrelevant to their rulings.

Trump was referring to two major decisions this past week on LGBT rights and immigration in which the conservative-leaning Supreme Court handed him defeats. But they were nothing personal.

Chief Justice John Roberts sided with the court’s liberals in both cases. Also ruling against Trump in the LGBT case was Justice Neil Gorsuch, one of Trump's two appointees.

Roberts has sought to emphasize the judiciary’s independence from the political branches of government and make clear that justices are not “politicians in robes.” After Trump in 2018 went after a judge who ruled against his migrant asylum order, calling him an “Obama judge,” Roberts issued an extraordinary rebuke.

“We do not have Obama judges or Trump judges, Bush judges or Clinton judges,” Roberts said in response to an inquiry from The Associated Press. “What we have is an extraordinary group of dedicated judges doing their level best to do equal right to those appearing before them.”