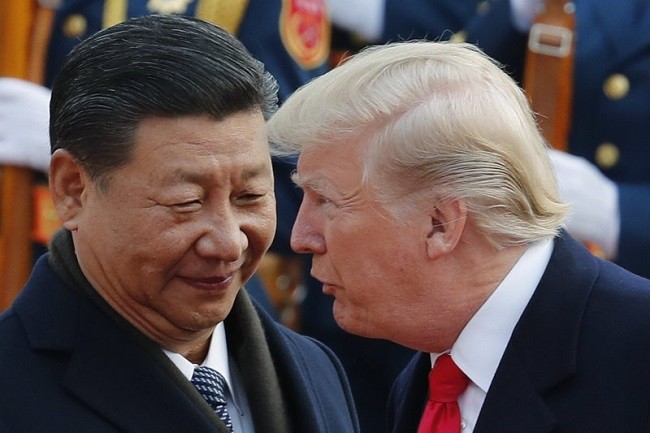 The Chinese Communist Party (CCP) is continuing its campaign of surveillance, disappearances, and what many in Washington, including key Trump allies, consider to be cultural genocide in Xinjiang.

In an interview with Axios, Trump was asked why he had not imposed Treasury sanctions on Chinese government officials and entities involved with the "re-education camps" in the western region. Over 1 million Uyghurs and other Muslim minorities are believed to have been imprisoned in these facilities, where survivors say they are made to denounce their faith and are subjected to cruel and degrading treatment such as torture, forced sterilizations, and executions.

The president responded that he had not applied sanctions over China's activities in Xinjiang because this would have complicated his efforts to sign a trade deal. "And when you're in the middle of a negotiation and then all of a sudden you start throwing additional sanctions in — we've done a lot. I put tariffs on China, which are far worse than any sanction you can think of," Axios quoted him as saying.

The "Phase 1" deal, inked in January as the trade conflict between the world's largest and second-largest economies entered its second year, included China's commitment to boost its purchases of American goods and services in the next two years by at least US$200 billion over 2017 levels. China also made some concessions on patent protection, forced technology transfers, and other areas of contention in exchange for the U.S. halving tariffs on $120 billion worth of goods and holding off on new ones.

Still, tariffs are a far cry from punitive measures against the specific individuals and entities implicated in the abuses committed against Uyghurs that many in Trump's own party have sought.

Several dozen legislators, including Republican Senators Marco Rubio and Tom Cotton, have asked that he invoke the Global Magnitsky Act, a 2016 law that targets those committing human rights abuses, to revoke or deny them travel visas or freeze their assets within the U.S.

Trump denied having been briefed on the matter, saying "Nobody's mentioned it specifically to me with regard to China" and further stating that "If somebody asked me, I would take a look at it. But nobody's asked me." He also cited his signing of the Uyghur Human Rights Policy Act earlier last week.

This act, which drew rancor from the CCP and praise from China hawks and activists, requires the administration to report on human rights violations in Xinjiang and punish those it deems responsible. However, the legislation itself grants no powers not already included in the Magnitsky Act, and it falls to Trump to instruct the Treasury Department's Office of Foreign Assets Control to put the sanctions into action.

Other executive agencies have imposed their own penalties: The Department of Commerce in May blacklisted a number of Chinese companies and government institutions over links to the human rights violations in Xinjiang. And last October, the State Department slapped visa restrictions on CCP officials believed to be "responsible for, or complicit in" the activities.

Meanwhile, former National Security Adviser John Bolton leveled even more damning accusations at his former employer in his tell-all book "The Room Where It Happened," which dropped Tuesday (June 23) despite the White House's efforts to block it, citing security concerns.

Bolton wrote that Trump went so far as to express support for the Xinjiang concentration camps to Chinese leader Xi Jinping (习近平). Citing multiple officials who had allegedly been privy to Trump's conversations with their Chinese counterparts, Bolton said the president told that "Xi should go ahead with building the camps, which [Trump] thought was the right thing to do."

Bolton said the aim of this was to remove the repression in Xinjiang from the "list of possible reasons to sanction China, at least as long as trade negotiations continued," NPR reported. He also claimed Trump had tried to haggle with Xi over purchases of American agricultural products in hopes of bolstering his re-election bid.