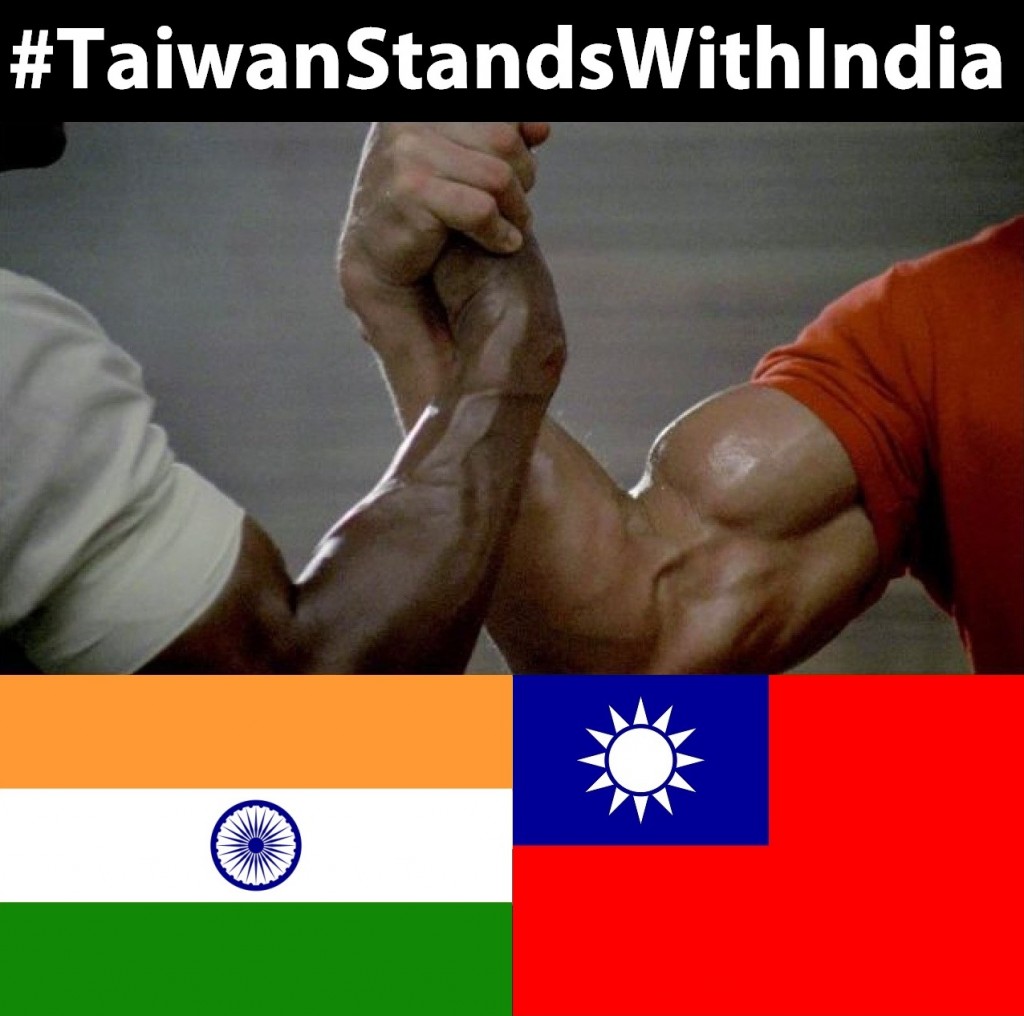 On Tuesday, a melee broke out between Indian and Chinese troops on a disputed stretch of border in the Ladakh region, with the Indian side suffering 20 dead and the PLA allegedly reporting 43 dead and wounded. The incident sparked outrage across India, prompting many to call for a boycott of Chinese-made products, burn effigies of Chinese Chairman Xi Jinping (習近平), and create a flurry of anti-China memes on social media.

An illustration showing Rama, the seventh avatar of the Hindu god Vishnu, drawing a bow and preparing to shoot a huge arrow into a Chinese dragon posted on Hong Kong social media site LIHKG and reported on by Taiwan News spread like wildfire in India on Wednesday (June 17).

Hong Kong Twitter user HoSaiLei on Wednesday created a meme showing two burly men arm wrestling with the hashtag #HKstandswithIndia and the flag of India and a yellow and black banner, symbolizing the pro-democracy protests in Hong Kong at the bottom.

Over the past three days, HoSaiLei's post has gained 9,363 likes, 3,842 retweets, and 434 comments. Hong Kong has been the scene of police violence perpetrated against pro-democracy protesters over the past year and will soon be subject to a draconian security law that Beijing is preparing to pass.

HoSaiLei told Taiwan News that another netizen had created the meme with the current Hong Kong flag imposed by communist China, which he said "does not truly reflect Hong Kong." He, therefore, replaced the red banner with what he described as the "Hong Kong revolutionary flag."

He explained that yellow represents the Hong Kong pro-democracy protesters and black signifies the radical measures many have decided to take. HoSaiLei emphasized there are several versions of the meme created by people in Hong Kong, and for that reason, it represents the sentiments of not just himself but Hongkongers as a whole.

Like India, Taiwan has found itself bearing the brunt of China's military aggression this week with People' Liberation Army Air Force (PLAAF) warplanes penetrating its air defense identification zone (ADIZ) four times, and six times over the course of just 10 days. Taiwan has responded to each incursion with strict warnings and fighter jets of its own, all resulting in a hasty Chinese retreat.

In the spirit of solidarity with India, Taiwan News has created a meme inspired by HoSaiLei's work. The template for the image is based on the "Epic Handshake" meme that is derived from a scene in the film "Predator," in which a handshake by old friends played by Arnold Schwarzenegger and Carl Weathers quickly turns into an epic, bicep-bulging arm-wrestling match. I, as a Hongkonger, support the people of #India!! And I believe my fellow #HKers would also be by your side. Please forgive my poor Photoshop skills#HKstandswithIndia pic.twitter.com/X9oe6LaZdq