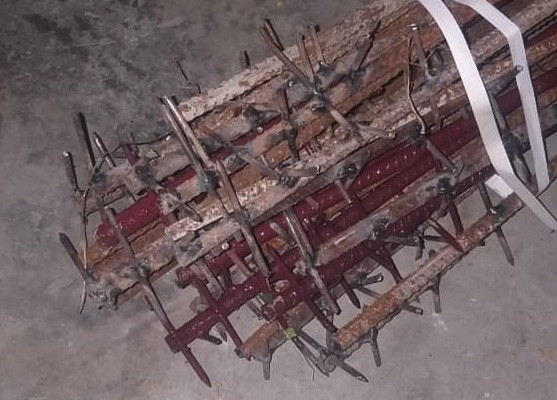 TAIPEI (Taiwan News) — A photo surfaced on Thursday (June 18) that purportedly showed metal rods with nails attached to them, which were allegedly used by Chinese soldiers to assault Indian troops during a deadly border clash earlier in the week.

On Tuesday (June 16), a melee broke out between Indian and Chinese troops on a disputed stretch of border in the Ladakh region, with the Indian side suffering 20 dead and the PLA allegedly reporting 43 dead and wounded. No shots were fired, with initial reports stating the two sides purportedly used fists, rocks, and clubs to fight each other.

Former Indian army colonel and defense analyst, Ajai Shukla, on Thursday, uploaded a photo to Twitter showing several rusted rebars with nails attached to them, some of which appear to be soaked in blood. Shukla wrote that the rods had been captured by Indian soldiers from the scene of the bloody brawl in the Galwan Valley.

Shukla alleged the rods had been used by Chinese soldiers to attack and kill Indian soldiers who were on patrol. He condemned the act as "barbarism" and described it as "thuggery, not soldiering."

Within 24 hours, the post had gained 42,000 likes, 21,000 retweets, and 3,015, mainly by furious Indian netizens. However, India TV cited Indian Army Headquarters as denying the veracity of the image.

The nail-studded rods — captured by Indian soldiers from the Galwan Valley encounter site — with which Chinese soldiers attacked an Indian Army patrol and killed 20 Indian soldiers.

Such barbarism must be condemned. This is thuggery, not soldiering pic.twitter.com/nFcNpyPHCQ