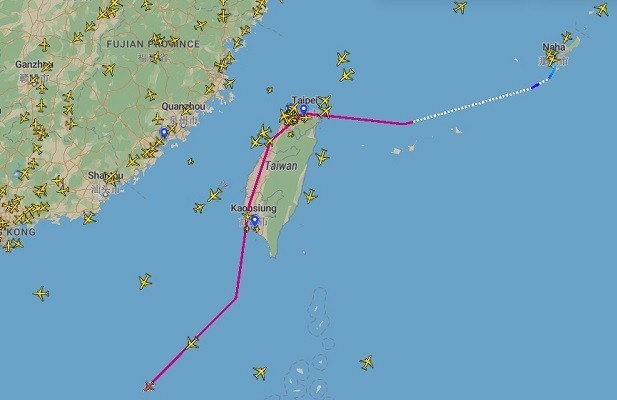 TAIPEI (Taiwan News) — A former U.S. defense official told VOA that last week's flight by a U.S. Navy aircraft showed the U.S. does not consider Taiwan to be part of Chinese territory.

On June 9, a U.S. Navy Boeing C-40a Clipper was detected flying over northern and western Taiwan by aircraft spotting sites. The flight was unusual because it was the first time a U.S. military aircraft had been spotted over Taiwan since two Marine F-18s landed at Tainan Air Force Base for repairs in 2015.

In an interview with VOA, the former U.S. Defense Department official responsible for China affairs, Joseph Bosco, said the U.S. has long considered Taiwan to be one of its "strategic and security partners." He said the fact that an American military aircraft had flown directly over Taiwan sends a clear signal the two countries have a close relationship and that neither will be intimidated by China's military provocations.

On Monday (June 15), Ministry of National Defense Spokesman Senior Colonel Ren Guoqiang condemned the U.S. for not first "obtaining permission from China before flying over its territory," according to China Daily. Ren then described the incident as "extremely erroneous and dangerous."

Bosco observed that China's argument is that Taiwan is part of Chinese territory. Therefore, based on this reasoning, the U.S. must obtain China's approval to fly over the island nation.

However, Bosco said the U.S. “of course rejects" this argument. He reasoned that from the U.S. point of view, Taiwan’s status has not yet been decided.

He further stated that its status must be decided peacefully "with the consent of the people of Taiwan." Bosco concluded that what is known is that Taiwan "is definitely not part of China, and is basically a de facto independent country.”

"Because we think it's Taiwan's territory now," Bosco said, the United States naturally applied for permission to enter Taiwan airspace.

As for China's constant military pressure on Taiwan, Bosco called on the U.S. Congress to pass Senator Josh Hawley's proposed Taiwan Defense Act (TDA) as soon as possible. He said that passing the act would send a strong signal to China the U.S. is bound to defend Taiwan.

Hawley said the bill is intended to enable the U.S. to fulfill its obligations, as outlined in the Taiwan Relations Act, despite an increasingly powerful and aggressive Chinese military. The proposed act would require the Department of Defense to take steps to ensure Taiwan could thwart a Chinese invasion and, specifically, achieve a "fait accompli" against Taiwan.