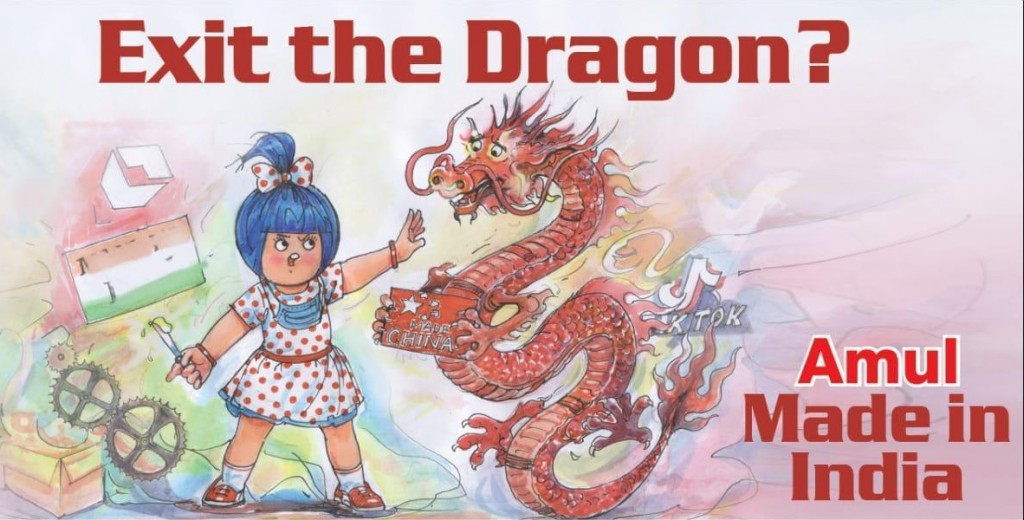 TAIPEI (Taiwan News) — An Indian dairy cooperative early this month posted an illustration of its iconic mascot turning down a product from a Chinese dragon, drawing nearly 1 million likes and the ire of Twitter's policing mechanism.

As tensions on the Sino-Indian heated up, Amul, a subsidiary of the Gujarat Cooperative Milk Marketing Federation (GCMMF), on June 3 posted a tweet in which it called for the boycott of Chinese products. As China has begun to flex its military muscles in disputed areas of Kashmir, Indian citizens have started to band together and call for a boycott of the communist country's products as a means to hit Beijing in the wallet.

In the tweet, Amul wrote: "About the boycott of Chinese products." He then included an illustration titled "Exit the Dragon?" referring to Bruce Lee's kung fu classic "Enter the Dragon."

In the image, the iconic Amul girl can be seen pointing to Indian manufactured goods while pushing away a red Chinese dragon bearing a Made-in-China gift. In the background and behind the dragon, the name and logo for TikTok and the words "Amul Made in India" can be seen.

The image rapidly went viral, eventually gaining over 910,000 likes, nearly 50,000 retweets, and over 4,000 comments. Twitter blocked the tweet on June 4, leading to a public outcry.

On June 5, the social media company later unblocked the tweet and claimed that it had been flagged by the platform's security algorithms. In an email statement, Twitter wrote, “Safety and security of the accounts is a key priority for us and to ensure an account has not been compromised sometimes we require the account owner to complete a simple reCAPTCHA process. These challenges are simple for authentic account owners to solve, but difficult (or costly) for spammy or malicious account owners to complete," reported The Indian Express.

The news site quoted Amul Managing Director R S Sodhi as saying "As far as the cartoon is concerned, it is not Amul’s comment. Amul butter girl comments on the mood of the nation and the topics which are in discussions among the common people." The Amul girl has been depicted in humorous ad campaigns by the company for 55 years.