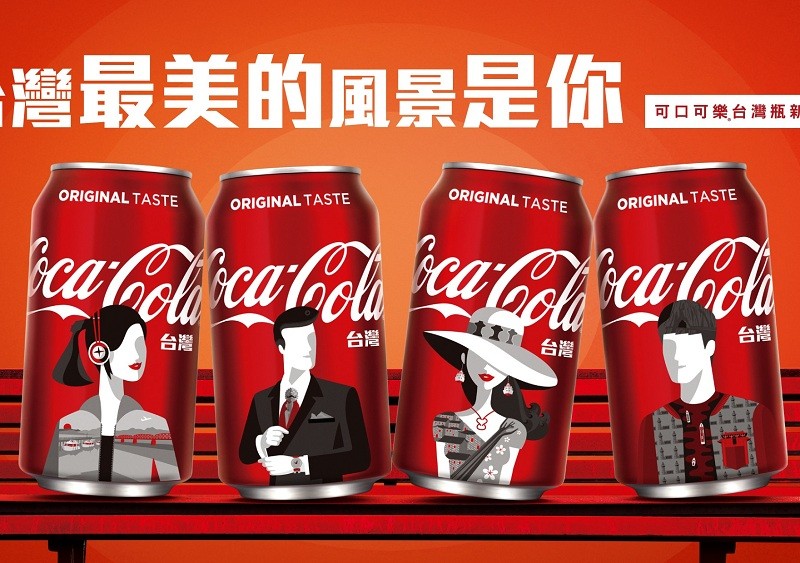 In one of the designs, a young woman is wearing earphones shaped like Taiwanese meatballs, a Changhua delicacy, and her ponytail is fashioned after the "Queen's Head," a well-known geological attraction in New Taipei City. Images of Sun Moon Lake in Nantou County, Xiluo Bridge in Yunlin County, and Taoyuan International Airport have been delicately blended into the pattern of her jacket, showing the combination of Taiwanese women's liveliness and fashion.

Another bottle features a man in a business suit representing the cleverness and balanced manner of the Taiwanese. His hair is styled after milkfish, a staple of Tainan cuisine, while his tie is a Wind Lion God, a popular mascot on Taiwan’s offshore county of Kinmen. His pocket square is designed after Turtle Island off the coast of Yilan, and his watch strap is shaped like Taipei's North Gate.

Yet another bottle depicts a charming woman wearing an elegant wide-brimmed hat that has the National Taichung Theater on its brim and a blouse that includes images of the Alishan Sacred Tree in Chiayi County, Qinbi Village on the outlying island county of Matsu, and tung flowers of Miaoli County. Her necklace is the Double-Heart of Stacked Stones in the island county of Penghu, and her earrings are cargo ships in Kaohsiung Harbor, according to the article.

The final bottle design shows an energetic young man with his hair styled after Hualien's Taroko Gorge, and his clothes including images of Eluanbi Lighthouse in Pingtung County, City God Temple in Hsinchu City, and Keelung Harbor.