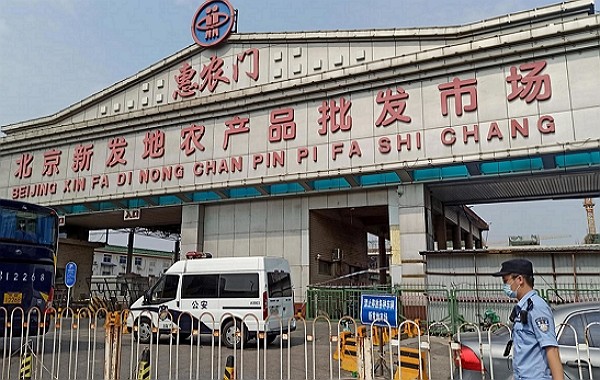 TAIPEI (Taiwan News) — The Chinese government has rolled out a "war mechanism," conducting mass testing to stem the spread of a new coronavirus cluster that emerged around a massive sprawling food market in Beijing.

After almost two months without having reported any coronavirus cases, officials in the Chinese capital confirmed Monday (June 15) that more than 100 new cases have been discovered since last Thursday (June 11), including 79 that were locally transmitted. They said the infections were linked to Xinfadi Market (新發地), the largest agricultural market in Asia.

According to the Chinese National Health Commission, the market and several nearby neighborhoods have been locked down since Saturday (June 13) to prevent a possible resurgence of the outbreak. It is estimated that more than 200,000 people have already visited the market this month, including several confirmed coronavirus cases who have since returned to the provinces of Liaoning, Hebei, and Sichuan, reported UDN.

At a state council meeting Saturday, Chinese Vice Premier Sun Chunlan (孫春蘭) warned that the risk posed by the new cluster is "extremely high" and that "firm and decisive" measures must be introduced to effectively control the situation.

Meanwhile, local authorities have adopted a "war" measure by creating 193 sampling booths around the city. Approximately 76,500 individuals were screened on Sunday, with 59 testing positive for the virus, reported 9News.

Chinese Center for Disease Control (CDC) Chief epidemiologist Wu Zunyou (吳尊友) pointed out in a media interview that it would be difficult to trace the source of the outbreak but that it was likely the infection had come from Europe based on genome sequencing results. He said a travel restriction is currently not necessary for Beijing since the cases have so far only been found in a limited area, reported Liberty Times.