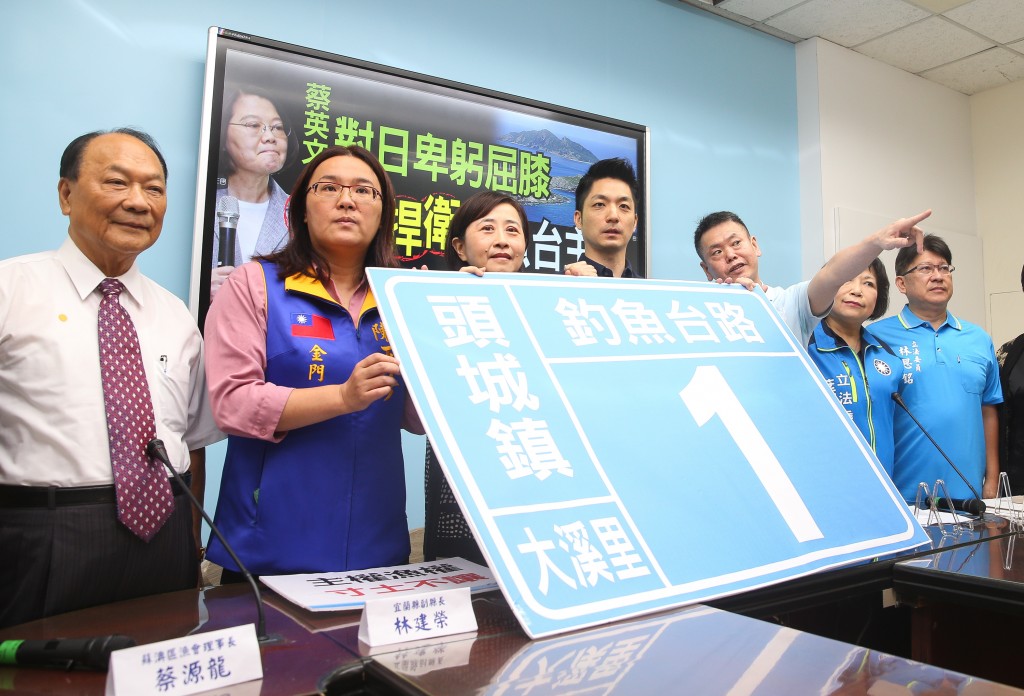 TAIPEI (Taiwan News) — As the dispute between Taiwan and Japan over the Diaoyutai Islands continues, Taiwan's main opposition party, the Kuomintang (KMT), is calling on President Tsai Ing-wen (蔡英文) to visit the territory to defend the country's sovereignty.

Both Taiwan and Japan have claimed jurisdiction over the Diaoyutai Islands, or Senkakus, as they are known to the Japanese. The latest furor over the islands has been sparked by the Japanese city of Ishigaki proposing a name change for the administrative designation of the territory.

Taiwan's Ministry of Foreign Affairs (MOFA) has stressed that the Japanese changing their administrative designation for the Diaoyutai Islands would not alter the fact that the territory is part of Taiwan. MOFA communicated via a statement on Monday (June 15) that the Naha branch of the Taiwanese Representative Office in Japan has telephoned Ishigaki Mayor Yoshitaka Nakayama twice since early June to express the view that the name change could imperil the amicable ties between Taiwan and Japan.

The mayor has defended the proposal for the name change, which has been submitted to the city council for further discussion, the Asahi Shimbun reported.

The Kuomintang has criticized Tsai for not expressing the government's stance and defending the country's sovereignty. At a press conference held on Monday, the party's legislators asked the president to visit the Diaoyutai Islands in order to declare jurisdiction over the territory.

Legislator Chen Yu-jen (陳玉珍) said that if the president does not consent to the suggestion, the KMT is likely to pay such a visit to the islands this Saturday (June 20). The KMT also demanded that the Taiwanese envoy to Japan, Frank Hsieh (謝長廷), be recalled to report to the legislature on how the representative office has been handling the matter.

"The government is currently making every effort to tackle this controversy," said MOFA via a statement in response to the demands made by the Kuomintang. "[We] hope the issue will be successfully resolved with Taiwanese fishermen's fishing rights [in this area] ensured.”

A number of Taiwanese civil groups, including the Taiwan Association for Recovery of the Diaoyutai Islets, rallied outside the Japan-Taiwan Exchange Association's office in Taipei last week to protest the potential name change by Japan's municipal authorities. As a riposte to Japan's proposal, the Yilan County Council passed a provisional motion last week to alter the Diaoyutai Islands' designation as "Toucheng Diaoyutai" to indicate that the territory is under the jurisdiction of the county's Toucheng Township.